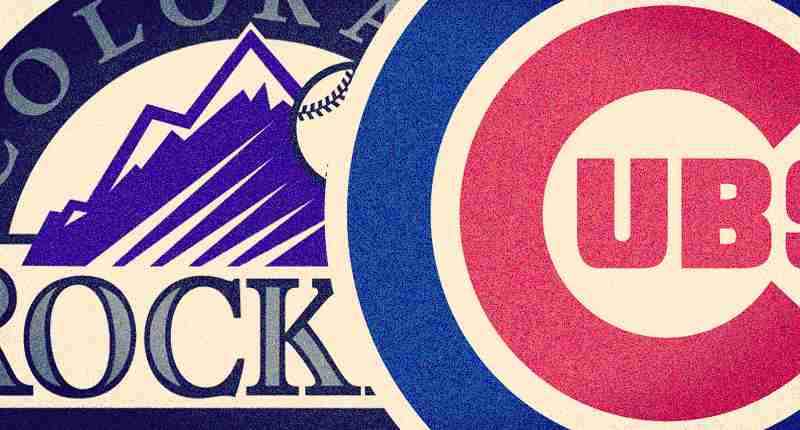 The Cubs may have just been swept by the Cardinals, but they’re technically coming off a series win thanks to their trouncing of the Angels yesterday (completing a series that started back in April) … right? Right? Just let me have it. I need it.

And that blowout win was exactly what the Cubs needed to clear their minds, because the RED HOT Colorado Rockies come to Wrigley Field, looking to move their winning streak to nine games. They’re still well-behind the Dodgers, of course, but if they keep playing like this they might start closing that gap.

HOWEVA, I will point out that all eight games of the Rockies winning streak came at home. And they actually play a lot better at home even after adjusting for Coors Field:

Remember, wRC+ is an all-encompassing offensive statistics that’s supposed to strip away park factors (like the extreme hitting friendly conditions of Coors Field). So you should expect to see a much smaller gap between a home and road wRC+.

Perhaps Rockies hitters adjust their game to fit the favor of their home ballpark in a way that helps them at home, but hurts them disproportionately on the road. Interesting stuff there. Let’s hope it plays out that way this week.

The Chicago Cubs (32-26) have not been winning a lot lately. I think that’s enough said. They’re in second place behind the Milwaukee Brewers, with the same number of losses, but two fewer wins.

The Colorado Rockies (31-27) have won eight straight games and 9 of their past 10. They have the longest active winning streak in baseball, but remain 9.5 games out of first.

Cubs Pitcher: Yu Darvish is undoubtedly the guy I’ve got my eye on this series, because after teasing nearly good start after nearly good start, he finally delivered on Friday night against the Cardinals: 6.0 IP, 1ER, 3BB, 6Ks. Darvish faced the Rockies to far less success last season (4.2 IP, 5ER), but that was (1) in Colorado and (2) just a handful of starts before his entire season was ended because of an arm injury. I’m expecting a much better performance out of him at home, healthy, and coming off a big start.

Cubs Player: Willson Contreras hit a bit of a slump (six-straight hitless games), before grabbing two hits including a homer yesterday. His overall season production is still 14th best in all of baseball – one spot behind Anthony Rizzo – so let’s see if he can heat up again and start carrying this Cubs offense. You should expect him to start tonight and Thursday, but not tomorrow with Yu Darvish on the mound.

Rockies Pitcher: German Marquez has been the 7th most valuable pitcher in baseball this season by fWAR (2.2), but that’s largely because of his longevity. Through 13 starts (t-most in MLB) he’s got 85.1 IP (t-2nd most in MLB). He’s failed to go 6.0 full innings only thee times this season, and he was just one out away in one of those games. And he’s been a killer on the road: 2.08 ERA, .206 wOBA against.

Rockies Player: Daniel Murphy has been a load of hot garbage this season: .241/.310/.414 with terrible defensive marks at first base. That’s left him with -0.3 WAR. But – OF COURSE – he’s been red hot lately. Murphy is currently working on a four-game hitting streak with seven hits and has a 143 wRC+ in his last ~50 plate appearances. It would be really nice if the current Cubs could shut this former Cubs down this week.