I Don't … I … What is Going on: Dancing in the Wrigley Stands in an Anthony Rizzo WHITE SOX Jersey? Skip to content 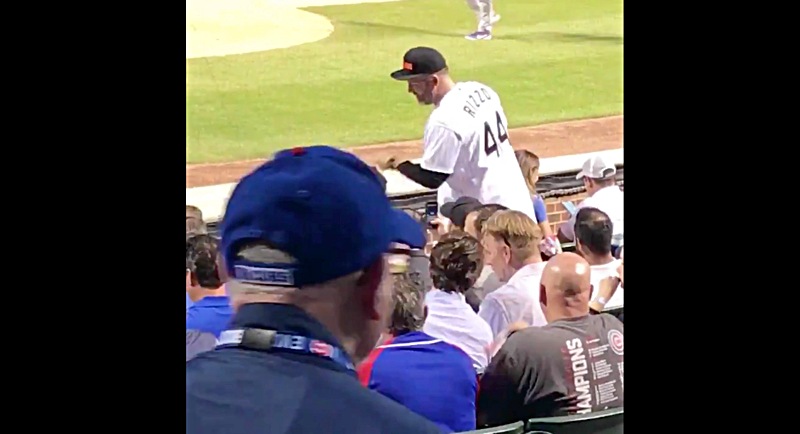 Look, I am very nearly a professional troll when it comes to deal with rival teams. I get it, and there are few online lengths I will not go to in order to needle a little fun out of a group of Brewers fans or Cardinals fans or White Sox fans.

But unless I were putting together some kind of performance art piece, the layers of meaning for which are so deep they will not properly be understood until tackled by an Advanced History of Western Art course at Dartmouth in 100 years, I cannot fathom doing something like this:

Come get your man, @NBCSWhiteSox.

I … truly … I … don’t know what’s going on here. For one very obvious thing, as NBCS notes, that jersey does not actually exist natively in the world, so that guy had it specially made for some reason. For a less obvious thing, he then specifically chose to wear it to Wrigley Field … in a game between the Cubs and the Rockies.

Is he a White Sox fan by birth but who loves Anthony Rizzo? Is there some kind of desperate hope behind that jersey?

Does he hate Anthony Rizzo so much that the worst thing he could think to do would be to drape Rizzo in the most egregiously awful jersey he could find?

Is he a Rockies fan who was trying to throw Rizzo and the Cubs off their game!?

Is he a PLANT sent by a secret international cadre of agitators to sew discord among the masses and foment revolution?!

IS IT WORKING ALREADY!?!?!?!? HAVE I PLAYED RIGHT INTO THEIR HANDS BY SHARING THIS OBSCENITY!?!?!?!? AM I, MYSELF, BEING SUCKED INTO THE POWERFUL ALLURE OF INSURRECTION?!?!?!?!

I WELCOME OUR NEW BLACK AND WHITE OVERLORDS!!!! ALL HAIL THE NEW KINGDOM OF RIZZONIA!!!!!