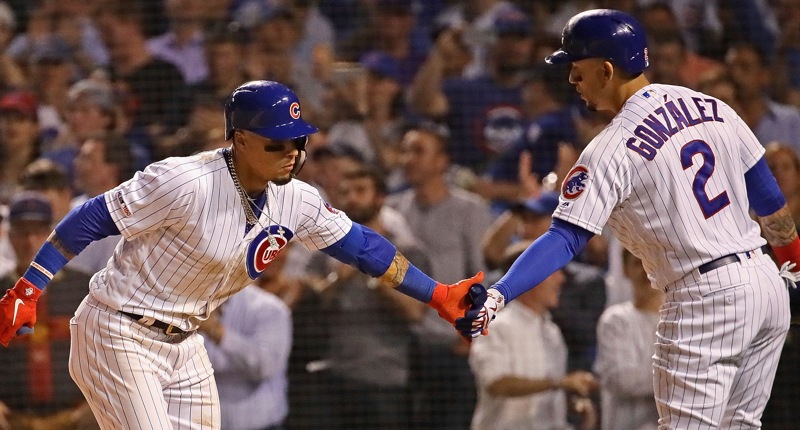 Javy Baez is feeling good. Clearly. His monster homer was not the only thing he did to help the Cubs win last night, but it sure is fun to watch:

Pitcher Jeff Hoffman looked so very disappointed at what he’d allowed Baez to do, but when Baez is feeling good, there’s just no shame in it, Jeff.

Baez added two singles on the night, and also looked great in the field, as usual. Oh, and there was an El Mago moment on the bases, when Baez ran through a stop sign and scored on a fantastic slide:

CARGO!! Former @Rockies outfielder, Carlos Gonzalez with a lined shot over the center fielders head and El Mago comes all the way from 1st to score!@Cubs tie it at 1 in the bottom of the 2nd!#EverybodyIn pic.twitter.com/RI1LZgghLQ

Speaking after his second straight huge game, Baez told reporters that the reason he came back so quickly from his heel injury a few weeks ago was because it really wasn’t bothering him at the plate, despite how his numbers may have looked (Cubs.com): “It didn’t bother me while running in a straight line or swinging. Rotating my feet doesn’t bother me. But, I think it did bother me going out of the box a little bit at first, but once it started, I kept working at it and it got better. It doesn’t bother me at all right now.”

Baez didn’t seem any worse for the wear after the game, reminding folks that when you crush the ball, everything feels good:

Javy Baez: "One of the funnest things is hitting – when you crush a ball, that's when everything feels good. As long as I keep crushing balls, I'll feel great."

Not a soul on Earth can argue with that logic.

After a massive home run… we had to catch up with Javy Baez. Check out @Kelly_Crull's On the Diamond interview, presented by @JandSJewelers pic.twitter.com/bJcPU9DgEH

I love this progression of shots from the Baez homer, especially the fans:

Carlos Gonzalez already understands what is going on:

"He's just the most exciting player in baseball. I think it's just — he does things on the field that it's just, there's no explanation."

A bonus on how Javy Baez helps his team win:

We see El Mago, but this is the kind of thing Javy Baez also does for his teammates. He is one of a kind, and is a force-multiplier in improving the team's performance. (from here: https://t.co/PNlCNL9dPU) pic.twitter.com/gq3ZySK223

You can win one of his shirts, too, over at Twitter:

Giving away 3 of these! Your pick. Rules are simple: 1. follow us 2. Retweet this. Winners announced Thursday. #obviousshirts #kissitgoodbaez #cubs pic.twitter.com/eu7YWHjHyg

Report: Blackhawks To Be Players in the Dougie Hamilton and Seth Jones Markets