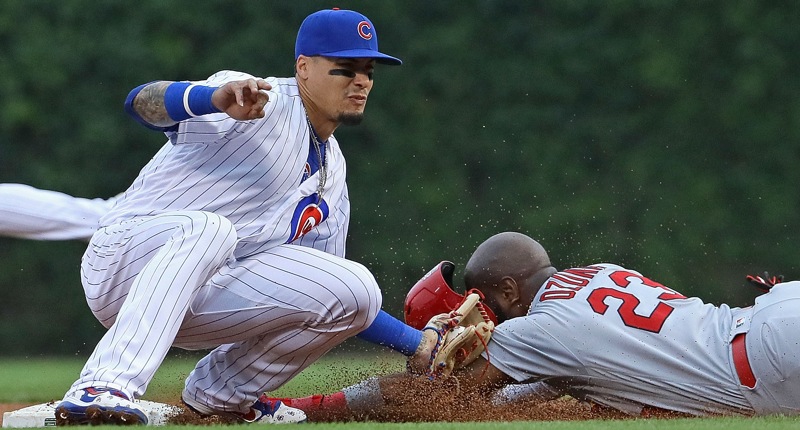 There are a number of Cubs players’ plays – like, specific things that they do – that stand out to us as particular things we love. When Kyle Schwarber obliterates one. When Albert Almora makes a great catch going backwards. When Jason Heyward makes a great catch coming in. When Kyle Hendricks embarrasses a lefty on a changeup down and away. And so on.

It’s pretty rare that you get to see TWO of those particularly awesome things on a single play, but that’s what happens when a guy tries to steal against the Cubs, with Willson Contreras behind the plate and Javy Baez settling in at second base for the throw:

Willson Contreras is so quick and so powerful behind the plate – you can feel his joy when a guy tries to steal – and that throw was so perfect. Then you have Javy Baez, the best tagger in baseball, who lets the throw get in as deep as possible before applying the tag in one, seamless motion, with absolutely no lost energy or speed.

Bonus? Baez wasn’t looking, as he’s known to do:

Double bonus? You know it was an incredible play when you make even Kyle Hendricks go wow:

Come for the throw and the tag, stay for the Kyle Hendricks reaction. pic.twitter.com/0cMTPYDBHL