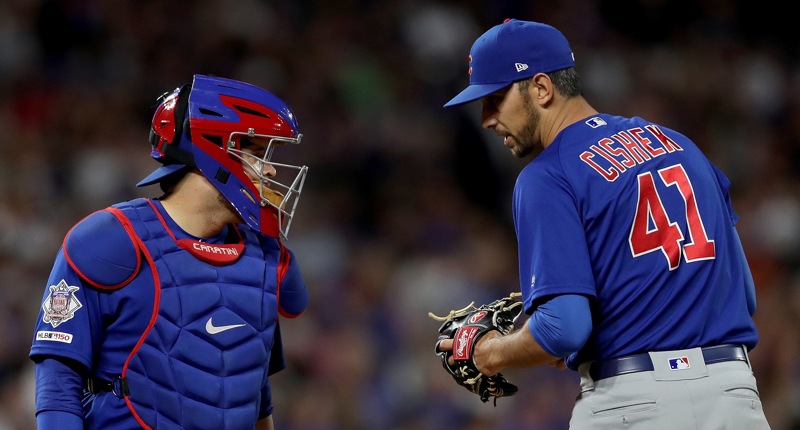 I was playing around with reliever stats yesterday afternoon, checking in on just how good (potential Cubs trade target) Will Smith has been, when I stumbled upon a couple EXTREME stats that somehow had escaped my perception while just watching the games.

When it comes to managing the quality of contact given up, Cubs reliever Steve Cishek has been like the equivalent of Mike Trout or something. But even better:

(Yes, that hard contact number is also – BY FAR – the best in baseball.)

I knew Cishek was having a good year (3.21 ERA, 3.11 FIP), but I had no idea his contact management looked like that. As I looked at that data yesterday, Cishek hadn’t just allowed the least hard contact among all relievers in baseball, he was leading the pack by an absurd amount. The same thing, as you can see there, for getting the most soft contact. It’s just so extreme.

Naturally, then, what happened a few hours later? He gave up hard contact, got no soft contact, and a couple hits allowed in the 8th inning lost the Cubs the game.

The thing is, though, the “hard” contact Cishek gave up was of the just-barely variety: an 88.7 mph fluke double by Daniel Murphy (an out 65% of the time), and an 86.8 mph looping liner hit by Ryan McMahon (an out 41% of the time). There were 32 balls in play last night hit harder than the game-winning McMahon single! THIRTY-TWO!!!

So really, Cishek was fine. No walks. A strike out. And some really-not-that-bad contact. Again: baseball. (And, more specifically, baseball at Coors Field.

Of note, to me at least, is the fact that the arrival of Craig Kimbrel probably doesn’t change games like that from happening. Cishek, as discussed, has been excellent this year, and was more or less fine last night, too. He’ll still be called up on to hold the line in the later innings of games long after Kimbrel has taken the reins in the 9th inning. Sometimes, he’ll cough it up.

I suppose the point here is little more than: Cishek is still good, games like that are going to happen, and I’m still happy Kimbrel is coming.