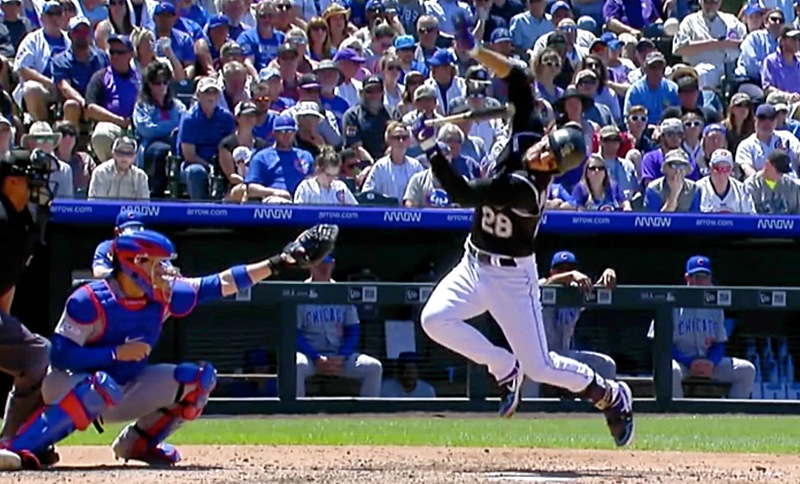 Up front, I’ll reiterate that, when it comes to throwing at batters because they hurt your feelings with a bat flip or a homer stare, I will never be OK with it. I will call you a giant pee-pee baby who needs his binkie after you justly get suspended for a month.

When it comes to throwing at batters because your own guys have been plunked, I think a more nuanced position is fair. On the one hand, I’m not about eye-for-an-eye, and to the extent retaliation is done as a pure eff you, I’m not about it. On the other hand, sometimes your guys are being hit consistently because they are being pitched dangerously or recklessly inside. I still don’t know that I’d immediately go to “so hit one of their batters,” but I at least understand how and why veteran pitchers might describe what they were doing as protecting their teammates.

Is that what happened yesterday when Cole Hamels plunked Nolan Arenado following Kris Bryant getting hit twice the day before (and in the head the year before)? Well, i think most folks have justifiably come to that conclusion, but Hamels was certainly not going to admit it (Cubs.com): “I’m just trying to get guys out. Ultimately, we’re just trying to win, and I know the damage he can do when he gets the ball out over the plate, so I’m just trying to pick a spot and unfortunately it went where it wasn’t intended to go. You don’t want to see that. You definitely don’t want to see guys get injured.”

And I do believe that last part. I really doubt Hamels intended for his pitch to wind up as high as it was, which is what ticked off Arenado: “I don’t really have to explain what’s going on here. You guys all saw the games in Chicago. You saw them here. It’s just baseball. I just thought [the pitch] was a little high.”

Of course, that’s one of the major risks when you start using a rock to police disputes – you’re not always going to be able to put that rock where you want to. Just throw it at the meaty part of the butt? Easier said than done when sometimes pitchers can’t even throw a pitch in the entire strike zone.

Arenado left the game soon after the HBP, though it was just a bruise situation.

For his part, Joe Maddon seemed not to like Arenado beefing:

Vintage Joe Maddon on the back-and-forth with the Rockies: “We get hit a lot. Rizzo gets hit a lot. KB gets hit a lot. I’ve always (said): You got two options. Go to the mound or go to first base. But don’t sit there and jabber. Make up your mind. Do one or the other.”

After the Arenado incident, Javy Baez got his tower buzzed, Hamels wound up taking a breaking ball off his foot, and Anthony Rizzo got hit square in the back. That was too much, though I did appreciate the way Rizzo (stealing a base up 8-0) and Baez (pimping the hell out of a homer) responded.

More from the shenanigan-laded final regular season game between these two teams:

Anthony Rizzo: “I don’t really know what (happened). It kind of got out of hand. But Nolan’s all right and everyone’s good over here.

“I think you can ask both teams, it’s annoying getting hit, in general. When you think it’s intentional, it is what it is, and you just move on.”

Nolan Arenado, if there were more games against the Cubs this season: "It would be a spicy series."

My only complaint is that Baez did not cartwheel to meet Rizzo on the bases, and then get a piggyback ride across home plate. https://t.co/6IFx0SVSeB

The Rockies & Cubs With all the drama today, a breakdown pic.twitter.com/aH736v39E9