Did You Realize Just How Hot Kyle Schwarber Has Been? | Bleacher Nation Skip to content 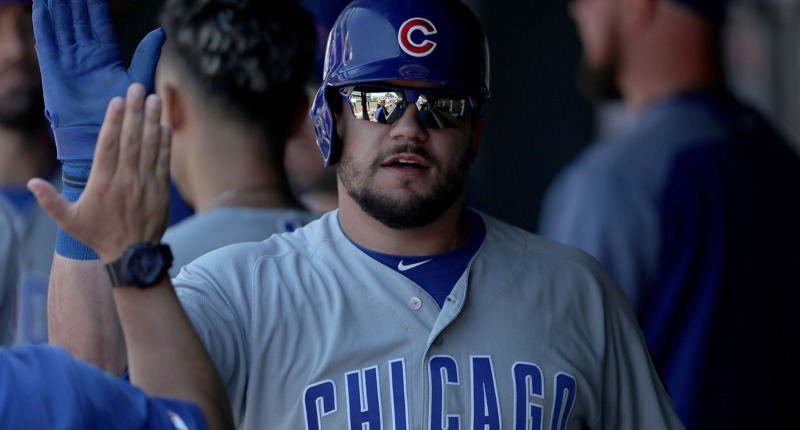 The Cubs couldn’t pull out a win yesterday, as Clayton Kershaw and the Dodgers bullpen (er, well, Julio Urias) combined to limit the offense to just three runs over 9.0 innings at Dodger Stadium.

It wasn’t one of those complete radio-silence type of games from the offense – Willson Contreras was on base twice with a single and a walk, Anthony Rizzo had a double, and Kris Bryant hit a homer and took two walks – but only one Cub had more than one hit in the game, Kyle Schwarber, because apparently, that’s what he does now.

Over his past ten games, Kyle Schwarber has recorded a hit in all but one contest, and has had a multi-hit game in 5 of those 10 starts. And with five home runs since the start of June, he’s already up to 15 long balls on the year, on pace for well over 30 by the time October rolls around. Nice hot streak, right?

But this is no recent hot streak. After an early-season slump tamped down your high-hopes for his 2019 season, Kyle Schwarber has pretty much done nothing but trend way back up in the right direction. 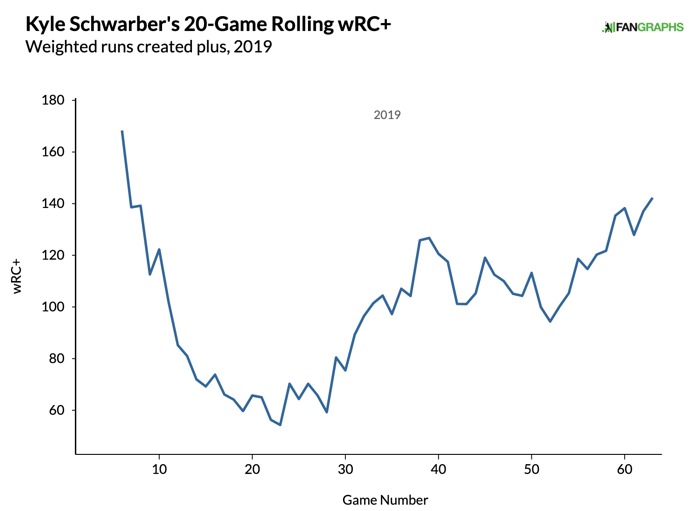 Schwarber hit a valley between games 10 and 30, or so, but bounced back really nicely ever since. If you include his numbers from the entire season – including that deep slump – he’s slashing a solid .238/.335/.484, which is 9% better than the league average hitter. But if you start looking back at various cutoff points, things get a whole lot more interesting.

For example, over his last …

Here are some reference points for those cutoffs, if you’re unfamiliar with wRC+:

Schwarber, 26, might not be a finished product just yet – I still wish he’d be more aggressive attacking pitches (his 41.6% swing rate is the 27th lowest in MLB) – but he’s very clearly trending in the right direction. And to say he’s been anything less than raking lately would be wrong. He’s been on fire. Obviously, we don’t yet know if Schwarber can keep this level of production up, but he’s been more than 20% better than the league average hitter for 200 plate appearances – and FAR better than that lately. That’s a really great start.

Joe Maddon has said this is the best he’s ever seen Schwarber look, and that may not be a crazy proclamation.

Also, let this blow your mind: