How About a Howie Kendrick Trade for the Cubs? | Bleacher Nation Skip to content 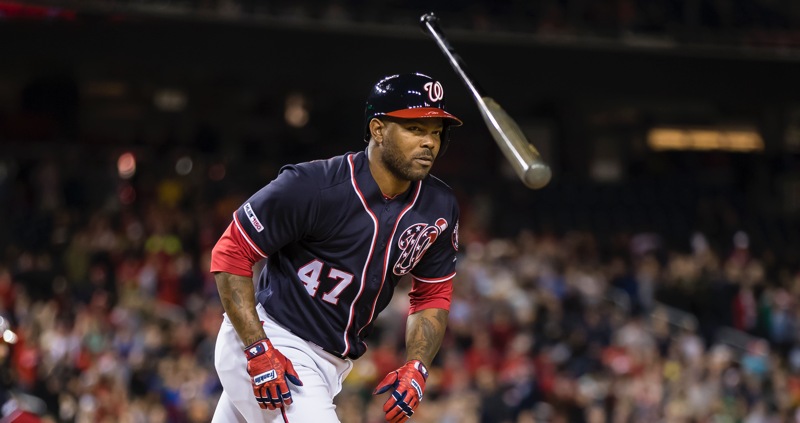 Although probably not at the tip of everyone’s tongue this trade season, I don’t think it’s too difficult to make an argument that the Cubs could stand to add a position player either to the bench or as a fringe starter.

Consider what has happened to the Cubs’ bench pieces since Spring Training:

Throw in the mixed offensive performance in the outfield, and I don’t think it’s at all reactionary to suggest that the Cubs would be well-served to keep an open mind about adding a Daniel-Murphy-like veteran rental bat this year.

With that in mind, Mike Petriello’s latest caught my eye:

Howie Kendrick spent a decade as a reliably steady 2B for LAA.

Now, at nearly 36, he's.. a slugging bench player who would fit on nearly any contender if the Nats sell? On a transformation:

In case it escaped your notice, Kendrick completely revived his career at the plate in 2017, surging from there to a massive .333/.383/.602 line so far this season that, while probably a little too power-heavy to be sustainable, is generally reflective of how well he’s been hitting the ball (and not striking out). Dude has the 7th highest expected wOBA in all of baseball, just behind Christian Yelich and ahead of George Springer!

While you shouldn’t bet on Kendrick to be among the 10 best hitters in baseball in the second half, as Petriello explores, he’s doing so many things so very well right now that it’s not an unfair bet to say he’ll be a very good hitter the rest of this year. And he’s doing it on just a $4 million salary.

So, yes, should the Cubs look to add this type of bat during the trade season, Kendrick seems a very good fit for the Cubs (among many other teams). He can play second base, first base, third base, and probably can still handle a corner outfield spot if necessary. In other words, he could be the Ben Zobrist that the Cubs have lost, moving all around as necessary to get his bat in the lineup.

Of note, before his 2016 free agency, Kendrick was reportedly under consideration as a Cubs target. The Cubs, of course, wound up opting for Zobrist instead, but it’s a further indication that they liked Kendrick back then.

This can all change by the time July 31 rolls around, as David Bote might more fully break out or Ben Zobrist might be returning sooner or Addison Russell and/or Daniel Descalso may have turned it around at the plate. But this is the kind of move that should stay on all of our radars as the Cubs proceed over the next month, because there isn’t an obvious assist coming from AAA unless the Cubs decide Robel Garcia is ready for a look or Ian Happ is going to return as a beast.

Moreover, without the waiver trade period in August this year – which was when the Cubs picked up Murphy last year – the Cubs’ opportunities to make an addition of a quality veteran like Kendrick will be entirely limited by the July 31 Trade Deadline.

This, by the way, presumes the Nationals ultimately decide to sell, which is not a sure thing – they have a competitive roster (in terms of talent), and no doubt some pressure from ownership to stay the course with an expensive payroll. It’s what prevented the Nationals from selling off aggressively last year, and might happen again this time around. And if the Nationals don’t sell, it’s hard to see them moving one of their most productive bats.