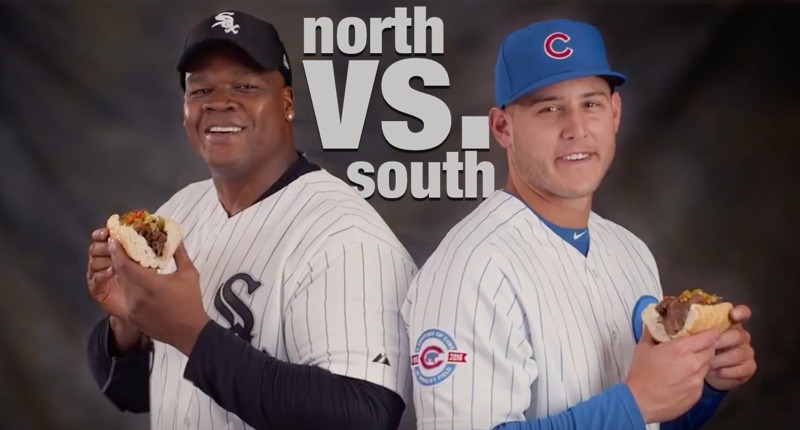 North Side … South Side … There’s one thing both sides agree on … Buona Beef.

There’s only a handful of commercials as stuck in my head as that crosstown Buona Beef ad with Anthony Rizzo and Frank Thomas (we’re talking Jeff Vukovich, Ankin Law, and 1-877-KARS-4-Kids level memorization). Although I’ve gotta say … Buona Beef is not my favorite beef in the city. In fact, it’s probably not even top-3 (Portillo’s, Al’s Beef, Johnnie’s Beef). This conversation has really drifted away from me, though. Let’s get back to baseball …

… because THE CUBS AND WHITE SOX ARE PLAYING A SERIES!

It’s always fun when these two teams get together, because even as they’re not direct rivals in any true sense of the word, the team colors always come out (literally or not) throughout Chicago when they square off. And, indeed, while the Cubs may be the better team overall, the White Sox actually hold the series 60-58 lifetime. And that means a sweep at Wrigley Field would even things right up. Let’s do it. Go Cubs.

The Chicago Cubs (39-32) have gone just 5-5 in their last ten games. Indeed, since sweeping the Cardinals from June 7th to the 9th, they lost 2 of 3 to the Rockies and 3 of 4 to the Dodgers. They’ve faced some really good pitching during this stretch, but they still need to win more games if they hope to keep up with the first-place Brewers (0.5 game up). Let’s hope that starts now.

The Chicago White Sox (34-36) have also gone 5-5 in their last ten games, but are 12.5 games behind the Twins in the AL Central. They did just split a series with the Yankees, though, and always seem to play up against the Cubs. So don’t sleep on them this week.

Cubs Pitcher: Pedro Strop has made five appearances since returning from the Injured List, allowing just 1 hit, 2 walks, and 1 earned run against 5 strikeouts. He’s gotten a ridiculous 71.4% ground ball rate during that stretch and has not allowed any hard contact. In a couple weeks, he’ll be pushed down the depth chart – with the arrival of closer-to-be Craig Kimbrel – but in the meantime, it’s good to see him rocking.

Cubs Player: Kris Bryant hasn’t been particularly hot in the month of June (.250/.371/.442; 118 wRC+), though he’s not exactly struggling either. You’d obviously love to see him really heat up heading into the All-Star break and second-half, so how about a couple of big games at Wrigley Field to kickstart that process?

White Sox Pitcher: Lucas Giolito is finally living up to his big-time potential, with a 2.22 ERA, 2.71 FIP and 30.3% strikeout rate this season. The Cubs will get him tomorrow and it won’t be easy. He has been very good.

That Decision to Pull Snell, Aesthetically Pleasing Baseball, Prior Gets His Ring, and Other Cubs Bullets

After Positive Test, Justin Turner Was Reportedly Asked to Isolate Away from the Field But Refused