What to Expect When You're Expecting Adbert Alzolay Skip to content 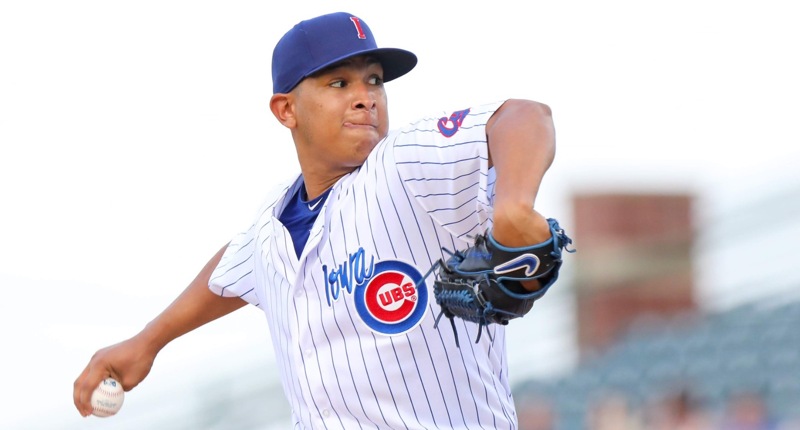 One of my favorite players to watch in the Cubs minor league system is likely to make his big league debut at Wrigley tonight, so before many of you see Adbert Alzolay for the first time, I wanted to give you some perspective on what to expect.

Alzolay, 24, is a small right-handed pitcher, listed at 6-0, 179, though I bet that weight doesn’t account for muscle gain during his large time off with injury. Alzolay draws a lot of praise internally for his workout regimen, and it shows with a thick lower half. After struggling with endurance last year – falling apart hard in his third time through the order – his stuff is holding up better this season. His delivery is relatively nondescript; there aren’t a lot of moving parts, allowing him to repeat it easily. You will see some effort on his arm in the delivery, but it still looks like easy velocity coming out of his hand.

The biggest thing you’ll notice: Alzolay is among the fastest workers on the mound I’ve ever seen. He’s seriously in Mark Buehrle territory. Triple-A broadcaster Alex Cohen will often laugh on air that Alzolay doesn’t give him time to even describe the previous pitch before the next one comes in. One important sign of his comfort and nerves in the Majors tonight will be if he’s maintaining this tempo. Don’t assume working fast will be a sign of nerves; in my mind the opposite will in fact be true.

You want a taste of the nasty that #Cubs prospect Adbert Alzolay (@adbert29) was serving up to Omaha tonight? Check out his 7th inning work against the 3-4-5 batters. I don't even need to edit these ABs he made such quick work of them.
4 Pitches: pic.twitter.com/XJJ4J7Dunr

I will be watching closely to see how simple the Cubs choose to keep things for Alzolay tonight. At times, he can throw up to five pitches: 4-seam fastball, 2-seam fastball, curveball, changeup, slider. The latter is a newer pitch this year that he hasn’t thrown much. I suspect it will be scrapped. Alzolay’s confidence with the changeup has waned up and down over the years – to me it was at its best in 2018 before his lat injury. I’d expect he will show it to a lefty tonight, but it’s also the most likely thing he’ll shake off. Not elevating the pitch will be key.

Primarily, we’re going to see fastball and curveball. In one outing this year, in New Orleans, that was about all he threw anyway. Fastball command is essential for him to maximize results. Alzolay doesn’t have a lot of movement with his fastball, even the two-seam, so commanding the corners is huge. He’s usually good in this regard, and can pitch both arm and glove side with confidence, but you never know how nerves will effect things. I’ve noticed more arm-side run this year particularly on pitches up in the zone, but that’s not likely to pop out relative to other Major Leaguers. Expect 92-96 mph with the fastball, perhaps a tick or two more if the adrenaline is really running.

This season has seen the emergence of his curveball as a foundational, all-the-way-plus offering. His command has been really special, showing it often on the first two pitches of an at-bat, commanding it into the dirt with two strikes, and even having the guts to throw it in 3-ball counts. I hope whoever is catching isn’t afraid to test Adbert throwing it in important counts, even to lefties. It’s good enough.

For most of his career, Alzolay has been a primarily fly ball pitcher. His early career saw a gradual rise from the 31.6 GB% he put up in the AZL to 37% in the Northwest League and up to 42.6% in the Midwest League in 2016. But ultimately that proved to be the high water mark. Alzolay was at 37.7% in the Carolina League and then down to 33.3% in the Southern league. It’s worth noting after posting a mere 35.7 GB% in Triple-A last year, Adbert has the number up to 41.7% this year, perhaps due to the increased movement I’ve seen on his fastball. But with all the fly balls, home runs are going to be a bugaboo he has to avoid against the world’s most talented hitters.

After showing the faintest normal platoon split consistently throughout his career, it’s noteworthy that Alzolay has been exceptional against left-handed hitters this year. They are batting just .245/.269/.306 against him, striking out an astounding 40.4% of the time. And note that the batting line is actually inflated by a .393 BABIP, whereas his .218/.277/.414 line allowed to right-handed hitters sports a normal .273 BABIP. I think he’s pitching lefties inside more often this season while also more comfortable throwing his breaking ball. It’s been a huge development.

One split that’s probably insignificant, but has stayed consistent, is a decrease in success when pitching from the stretch. For each of the last four seasons, Alzolay has been worse with runners on base than when the bases are empty. This year the split has been extreme, as hitters are batting .356/.375/.578 with runners on base (this includes his rehab start). There’s a chance that Alzolay’s stuff plays better out of the wind-up – this is something we see in young pitchers sometimes – but it’s not something I overtly notice on video. Something to keep an eye on nonetheless.

I delved into this on Twitter today, so I’m just going to take you there. Tonight will be an exciting moment for an International Scouting Department whose best successes this decade have come with players in different uniforms. I’m happy a success story from that department will finally come in Cubby Blue.

Alzolay would come stateside the next year, 2014, debuting interestingly with the Boise Hawks for one game before being returned to Arizona to make nine rough appearances in the AZL, first as a piggyback starter and then as a reliever.

The AZL that fall was worth mentioning. Alzolay’s first 3 appearances were all 2 IP, 0 H. He was proving it at the highest level. Then, because this is how prospecting works, when we were at our highest excitement, he allowed 6 ER in 0.2 IP on 10/31 in his final appearance.