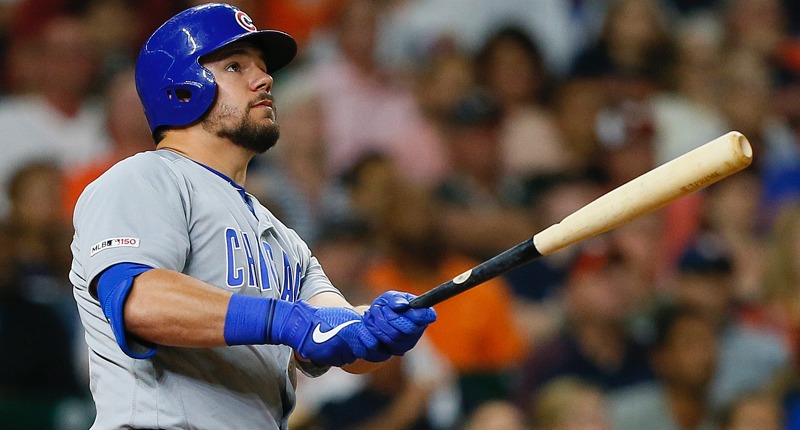 Last season, Kyle Schwarber made a pretty big comeback after a struggle-filled 2017 campaign. Regardless of how you felt/feel about his defense, his .238/.356/.567 slash line was good for a 115 wRC+ last year. Put one way, that means that he was 15% better than the league average hitter. Put another way, he was (tied as) the 63rd most productive offensive contributor in MLB and top-30 in the National League.

It was a good bounce back year. But things haven’t gone quite as well this season – at least, not on the surface:

Now, I could do some magical cutoff dates to make him look better, by saying something like, well check out his slash line since …

Because, I mean, hey: I have nothing but love for a trend line that looks like this: 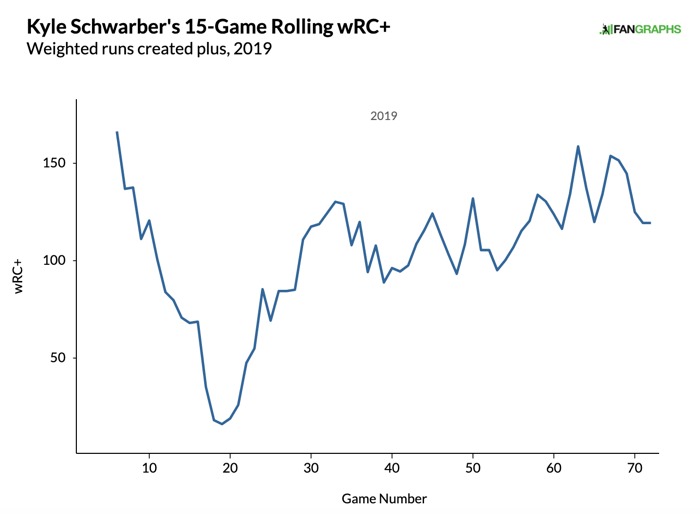 … but I’m totally not going to do that.

Instead, I just want to point out how much better he seems to be doing behind the curtain this season than he has in the recent past. Let’s start with the BABIP.

This season, Kyle Schwarber has a .267 BABIP, which is (just barely) below his already low career-mark and the 31st lowest in all of baseball. At this point, all the usual caveats would apply: Sure, that’s probably an unfairly low BABIP, but the dude’s relatively slow and very prone to being smothered by the shift.

(1) While you may say he’s slower than the average hitter, he’s also a lefty, which gives him an advantage out of the box.

(2) While the shift can work against him, his 29.4% opposite field rate this season is nearly five full percentage points above his career mark and 15% better than the league average. In fact, Kyle Schwarber ranks 23rd in all of MLB going the opposite way this season.

On top of that, only 10 batters with a worse 2019 BABIP than Schwarber have a better hard-hit rate and not ONE single batter has a better soft-hit rate. In fact, Kyle Schwarber’s 9.0% soft-hit rate is the third best mark in all MLB, behind Justin Turner and J.D. Martinez and just ahead of Xander Bogaerts.

So while some of these arguments may have been less convincing in the past, that’s just not the Kyle Schwarber we’ve seen this season. And yet … we’re talking about one of the lowest BABIPs of his career. But let’s not stop there.

It’s one thing when you don’t get lucky with some natural, positive regression, but it’s entirely different story when you’ve earned an uptick and are still not getting the bounces.

And whaddaya know: According to Baseball Savant, Kyle Schwarber’s expected batting average this season is actually up there at .263 while his expected slugging is .499. If the balls just fell normally, we’d be talking about a season slash line of something like .263/.355/.499.

Indeed, Schwarber has actually been the 13th most unlucky hitter in baseball this season with an expected wOBA 48 points higher than his actual wOBA (h/t Jack Nugent on Twitter).

But I can already hear you screaming: Michael, Michael … that’s all well and good, but he still isn’t swinging at pitches right down the middle and when he does he misses!

Ah … not so fast, young grasshopper. Last season, Kyle Schwarber swung at 64.9% of pitches in the zone, but this season, he’s swinging at 67.3% of pitches in the zone (career 66.2%). And while he’s got a career zone-contact rate of 80.5%, he’s actually making contact with 83.0% of pitches in the strike zone this season. And to really button it all up, Schwarber is swinging at fewer pitches out of the zone than ever before while maintaining the single-lowest whiff rate of his career. (He could still probably stand to just … swing more often, but my point is that he’s beginning to do exactly that and without sacrificing more whiffs).

So, yes, really: Kyle Schwarber has been decently above average over the past ~200 plate appearances or so (and that’s great!), but he should be doing a LOT better than that. Whether it’s his eye, his aggressiveness, his pushback against the shift, or the quality/type of contact, Schwarber’s peripherals are a whole lot better than the results have been so far.

And with that in mind, I wouldn’t bet on this trend stopping anytime soon. #TeamSchwarber