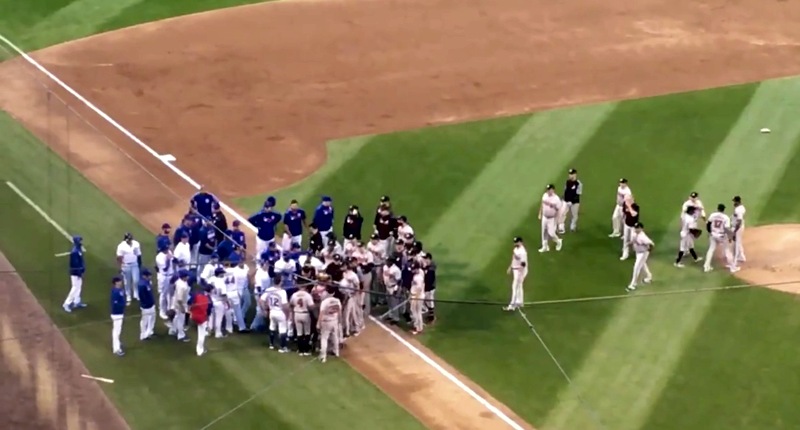 Willson Contreras is in the business of ticking the other team off. I’ll mostly say it’s on account of him hitting a dinger that gave the Cubs an early lead, but the Braves were also doing some crying about something else.

When All-Star Game voting resumes on Wednesday, don’t forget to tell ‘em about the best catcher in baseball. pic.twitter.com/64ufjfA4rh

Beautiful oppo shot there with two strikes. And apparently Braves catcher Tyler Flowers didn’t like something, because as soon as Contreras crossed home plate, he had words for Flowers:

Willson Contreras and Tyler Flowers do not seem to like each other very much. They exchange words after a Willson homer

That led to the benches clearing in a chit-chatty kind of way:

Contreras hits a home run to lead off the #Cubs second and gestured to the #Braves dugout, he had words with Flowers as he crossed the plate and tempers ensued. pic.twitter.com/pgMHWceV3R

Whatever the case, unfortunately, the Cubs are now going to have to watch their butts.

UPDATE: More from the Braves broadcast, which gives us a look:

Here's why Tyler Flowers and Julio Teheran were upset with Willson Contreras… pic.twitter.com/lfAxdy0sJa

Do you REALLY think Contreras turned to say something there without any other context at all? Think he just decided to pop off at Flowers for no reason whatsoever?

Whatever. That’s my catcher: