Willson Contreras Puts It Perfectly: "I Just Told Him to Do His Job and I'll Do Mine" Skip to content 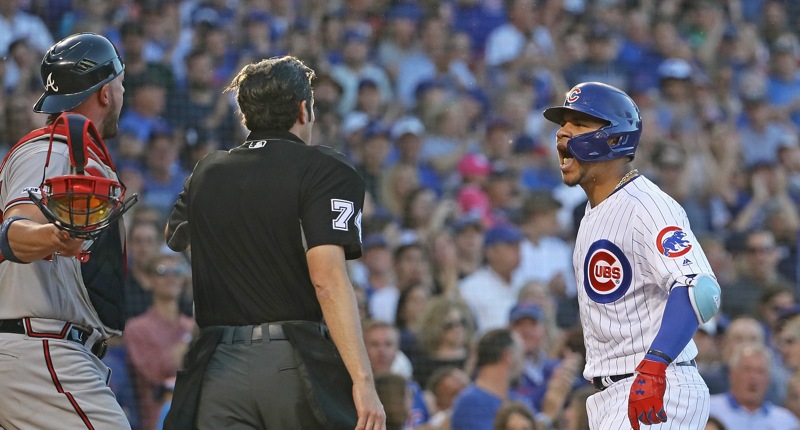 There was probably a lot that actually went into the dustup between catchers Willson Contreras and Tyler Flowers last night (Julio Teheran hitting Kris Bryant up high, and Josh Donaldson shushing the Cubs bench probably didn’t help), but now we know a little more on the specifics, and can make fun of Flowers accordingly.

Here’s a more complete visual on what happened:

So, it looked something like this: Flowers steals a strike below the zone with a great frame job. Contreras, a fellow catcher, talks to the umpire about the strike – an extremely normal thing for a catcher to do as part of the game. Flowers inserts himself into that conversation for no reason, and then laughs at Contreras.

So, yeah, when Contreras blasts one after that, he turns to say something to Flowers. I probably would have, too. Then on arriving at home plate, Flowers says something, and Contreras blows up.

Now, did Contreras probably get a little too heated in the moment? Did he perhaps push things a bit too far? Yeah, and yeah. But given that it was Flowers who stuck his butt into things, he should have accepted Contreras’s look back on the home run and then kept his mouth shut when Contreras arrived at the plate (or, better yet, complimented him on taking a two strike pitch out the other way). That is to say, Contreras probably pushed the envelope, but Flowers twice injected himself when it wasn’t necessary or advisable.

Lol @ Jeff Francouer saying he should have thrown a haymaker at Contreras. We all wish you would have @BleacherNation pic.twitter.com/Dl05C2d665

Yeah, take a swing at Willson Contreras and let me know how that works out for you when you get back on your feet a week later.

Flowers described the situation with about as little self-awareness and as much condescension as a person can:

"It was all very unnecessary in my opinion. The guy's a decent hitter, he doesn't need to complain about every call. He got plenty of calls for his guys too, so sometimes you need to pick your battles, and that's hopefully something he'll learn as he gets a little bit older."

As for Contreras, when asked if he thought the Cubs catcher might be a bit of an agitator, Flowers said, "Now you're catching on."

This guy has the stones to insert himself into Contreras’s conversation with the ump, and then say *Contreras* needs to pick his battles? Then he laughs at Contreras and calls *Contreras* an agitator?

After the game, Contreras put it perfectly when discussing the situation:

Contreras was upset Flowers chimed in when he was speaking to umpire:

"Those pitches weren't even close to the strike zone. And he got mad, because I was talking to the umpire about that. He jumped into the conversation. So, I just told him to do his job and I'd do mine."

Oh, and Contreras’s response to Francoeur was a lot classier than I would have been able to muster:

First, Contreras let out a laugh, then responded… pic.twitter.com/RteLKcOKcl