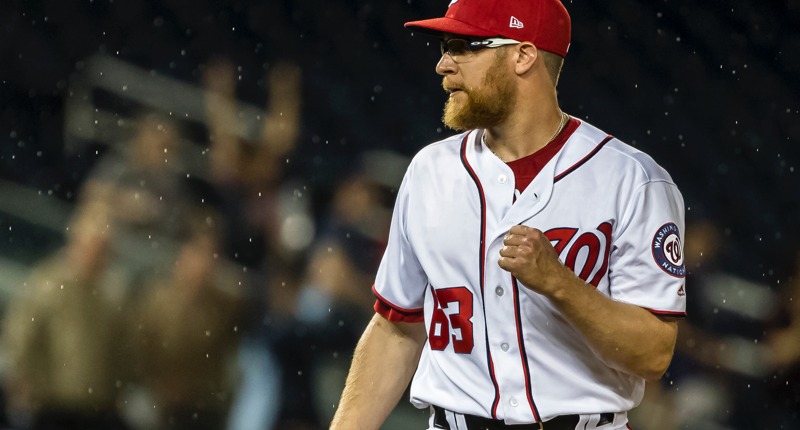 Now that the Cubs have Craig Kimbrel in the fold, the entire makeup of their bullpen has been revamped. They have a true closer (Kimbrel), a really good setup man in Pedro Strop, and two solid middle-inning, but high-leverage options in Steve Cishek and Brandon Kintzler.

The only potential problem is that all those best late-inning options are right-handed.

In the regular season, and for most games, that isn’t a huge problem. You don’t constantly use late-inning arms for match-ups anyway, and you see so many full-inning jobs (like yesterday) that handedness isn’t a huge consideration for back-end relievers.

But there ARE times when the full inning you want covered is heavy on lefties. Or there IS a particular situation and match-up where you just want to go ahead and use a late-inning guy for a very particular situation. Or – God willing – in the postseason, you absolutely want the most impactful lefty you can find to work into an otherwise righty-heavy mix.

As far as lefties go in the Cubs’ current bullpen, there’s Mike Montgomery, who’s more of a long-man, and isn’t exactly pitching well at the moment (oh, and is actually carrying very significant reverse-splits this season). There is also Kyle Ryan, who is actually having a pretty nice season overall (28.2 IP, 3.45 ERA, 3.39 FIP), but it’s not clear yet if he can be an impactful late-inning option, and he, too, has been almost exactly split-neutral this season and throughout his entire career. Obviously, that’s not a bad thing if you’re performing well against both types of hitters, but the Cubs pretty clearly do not have a guy who is particularly good at brutalizing left-handed hitters.

So while I think we’re all thrilled with the acquisition of Kimbrel, it’s easy to agree the bullpen could use one more, very specific piece: a dominant lefty.

I know the Cubs need a high leverage LH reliever and I keep hearing the name Sean Doolittle of the Nationals as a potential target. I’ve watched him a lot lately and his velocity appears down and he has not been great. Be careful.

Sean Doolittle’s name has come up with respect to the Cubs once already this season (right after his little beef with Joe Maddon), but it’s been mostly quiet since then. So I’m wondering … could the Cubs actually swing a deal for the lefty? And is he the right target?

Well, let’s start with his theoretical availability. While I’m sure MANY teams are hoping the Nationals take a sobering look at their .500 record and 7.0 game deficit in the NL East and decide to sell this deadline, it’s far from guaranteed. In fact, I’m willing to bet THEY don’t even know what they’re going to do yet. If they manage to hit a bit of a hot-streak before the middle of July, I wouldn’t be surprised to see them double-down on this season and actually add to a roster already loaded with talent.

And considering their upcoming schedule features nine straight games against baseball’s worst teams – Detroit (26-50), Miami (30-49), and Kansas City (28-53) – plus another two games against Baltimore (22-58) before the deadline, they have a real shot at turning things around very quickly. Point being: this could all become moot very fast.

But if it isn’t, is Doolittle the right fit for the Cubs? Well, on paper, I think that’s fairly obvious.

In his age 32-season, Doolittle, a lefty, has earned a 3.27 ERA and 2.91 FIP with 17 saves through 33.0 innings this season. And as you might’ve guessed by his lofty inning total and save count, he hasn’t been used like a LOOGY at all (rightfully so, I’d add). Of course, if he were to be used against left-handers more often than not – say, on a team that already has a true closer and really good set-up man – he might improve those numbers even more:

I can’t claim to have watched Doolittle closely like Kaplan has, but I can tell you that he’s allowed just 12 total earned runs this season, 4 of which came in one outing back on May 22nd. Indeed, in his 10.0 June innings, Doolittle’s 2.70 ERA and 1.58 FIP look like a bit of a revelation.

And as for his fastball velocity, well, I think the chart speaks for itself: 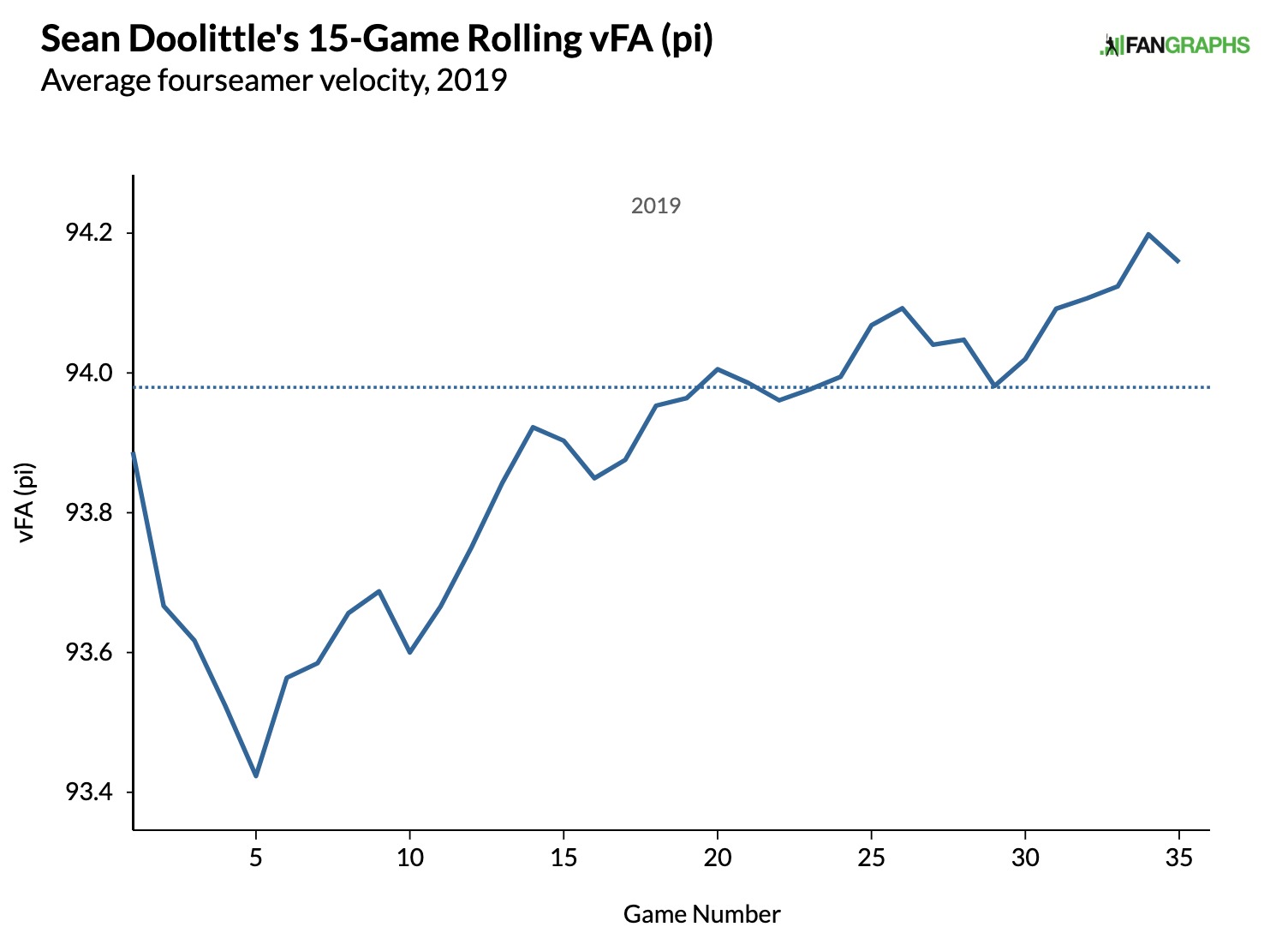 Perhaps it’s absolutely fair to point out that his average fastball velocity this season (94.0 MPH) follows a trend of decreasing velocity …

… But I think it’s (1) not terrifyingly low, (2) clearly trending in the right direction in-season, and (3) still coming early. Pitchers often improve their velocity as the season goes on, and Doolittle seems to be within a MPH of his career 94.9 MPH average here lately.

But there is another Doolittle wrinkle: his injury history.

Doolittle began the 2015 season on the Injured List with a shoulder injury, ultimately throwing just 13.2 innings that season. A year later, he managed to throw just 39.0 innings thanks to another two-month stint on the IL with a strained left shoulder. Two years after that (2018 season), Doolittle missed 54 games with left-toe inflammation. He’s been mostly healthy this year – and relievers getting hurt is about as certain as death and taxes – but it’s clearly a part of his overall story.

Maybe it doesn’t have to matter that much. Part of the reason Doolittle could become available in the first place is because this is the final guaranteed year of his contract. He’s got a $6.5M club option for 2020 – and if you trade for him, you’re going to be paying for the right to exercise that option whether you want to or not – but my point is his long-term health doesn’t need to be the focus. So long as you think he can help out instrumentally this season, you can always buy him out of 2020 for just $500K (and whatever extra you had to pay to get a guy with a super affordable club option like that).

None of this is to say Doolittle is my first and only choice for the Cubs – he’s not necessarily and the Nationals may not even sell – but he has been good overall, is especially tough on left-handed hitters, comes on a bit of a sweetheart deal, and should almost definitely cost less than a guy like Will Smith. So long story short: if the rumblings David Kaplan has heard so far are true, I would be pretty excited by the possibility.