For the second season, the Cubs have two affiliates in the Arizona Rookie League as they attempt to cast the widest net possible to develop prospects. These two teams are nine games into the season, but I thought it best to wait out the first stretch of games before “previewing” the action. Remember, the AZL is extremely fluid, with rehab assignments, draft picks, and players from the Dominican complex coming in and out all the time.

For example, one of those rehab assignments is Nico Hoerner, who triumphantly returned yesterday from his hand/wrist injury with a 2-for-3 day.

What I’ve tried to do below is give you an idea of the players who will provide AZL managers Carmelo Martinez and Ricardo Medina some stability this summer; the guys most likely to stay put for the rest of the 2019 season. At the bottom you’ll find a longer list of guys I expect to pop in and out, and that list will continue to grow and grow. The AZL is the wild west of the minor leagues, that’s for sure. 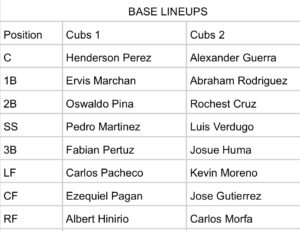 The intrigue here is most prevalent in the infields, as the Cubs will bounce all 2B/SS/3B listed here between all three positions. The biggest name is probably Luis Verdugo, who was a factor in my last prospect rankings, but did not receive the aggressive assignment to Eugene, instead heading back to the AZL. The Cubs will hope he shows a little more offensive polish this year.

I’ve heavily anticipated Fabian Pertuz’s stateside arrival, as the 18-year-old Colombian infielder had some eye-popping numbers in the Dominican Summer League last year. He’s off to a hot start, and could be the name that separates himself from the pack. A few of the other infielders – Martinez, Cruz, Huma – are all well-thought-of guys that could land on prospect lists with good seasons. We might also see infielder Reivaj Garcia come back to Arizona, as he’s off to a really slow start in Eugene.

The two catchers listed both received large bonuses in the past, but neither has progressed at the speed the Cubs might have hoped. The South Bend catcher spot will be an interesting competition next year, and a good summer here could give either the leg up. Hopefully Perez and Guerra will be joined by Ethan Hearn and Wyatt Hendrie, two of the Cubs draftees that still are not officially signed (though Hearn’s agreement is in place).

The outfields seem a little light, though I know Carlos Morfa’s power impressed over the winter, but that will be a spot particularly aided by 2019 draft picks. I would deem outfield and first base the weakest spots in the Cubs system, and that’s evident in these rosters as well. 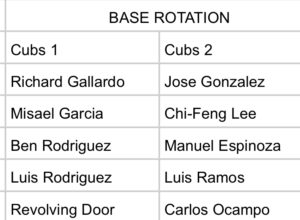 Richard Gallardo is the exciting name, last year’s highest rated international pitching prospect, whom the Cubs snagged with a seven figure bonus. Gallardo has pitched three scoreless innings in both his starts so far, and while he’s amassed just two strikeouts, he’s drawing significant praise for his polish (and not just for a 17-year-old, either). I will be eagerly anticipating videos of his curveballs all summer.

Ben and Luis Rodriguez both drew praise in the Dominican Summer League last year, but they couldn’t be more different. Ben is up to 96 mph with a high-spin fastball, but the results have been inconsistent, while Luis is a finesse lefty that had jaw-dropping numbers last season.

A sleeper to watch is Manuel Espinoza, who had to sit out last season while Major League Baseball investigated the validity of his contract. Now 18 years old, Espinoza has two really good appearances under his belt. Arizona Phil recently weighed in with his scouting report on the right-hander. 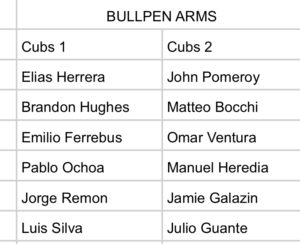 Not much to add here, but I’ll note I’m really rooting for Brandon Hughes and Jamie Galazin, two former outfielders the Cubs began converting to the mound this year. Hughes is a particularly dynamic athlete, and a southpaw, so he’s going to be watched closely. He already has nine strikeouts against just one hit allowed in five innings.

The Cubs like every draft pick to touch the Arizona Rookie League, and so, while many of the college guys will stop only briefly before heading to Eugene, they will play in Mesa first.

The Cubs also use the AZL as an important stop in every minor leaguer’s rehab from injury, so much of the intrigue from the AZL will come from our excitement about our favorite prospects returning.