Addison Russell Stands By Decision to Throw Home, a Boneheaded Play That Led to the Cubs Loss Skip to content 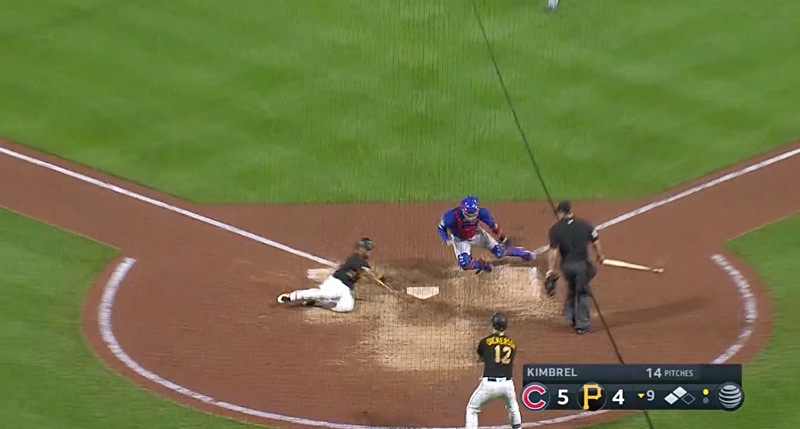 When Willson Contreras couldn’t quite catch a pop fly in the 9th with one out after Craig Kimbrel had walked a batter, the Cubs were in a very tough spot. With the tying run at third and the winning run at second, they could play the infield in and try to cut down that tying run at the plate … but leave themselves very open to a ground ball squeaking through and walking things off.

So, understandably, Joe Maddon had his defense play at a depth where, if they got a rocket, sure, they could come home – but otherwise, they could just take the out at first and live to fight another day.

That’s when Addison Russell got a bouncing ball far to his left – a ball that could have gotten through with the infield in, but that is an easy out at first with the infield back – and he did the unexplainable. He tried to throw home, and it wasn’t even close:

It was a serious mental mistake, and the Pirates walked it off thereafter on a sac fly. If Russell just takes the out, it’s far more likely than not that the teams head to extra innings, and we see what happens.

It would be one thing if Russell had, in the clearness of the post-game, realized his mistake and offered that he should have taken the out. But nope.

This is a joke:

DUDE. YOU WERE "A LITTLE TOO FAR BACK" BECAUSE YOUR MANAGER WANTED YOU TO GO TO FIRST BASE ON A PLAY LIKE THAT. AND HE WANTED THAT PRECISELY BECAUSE OF WHAT HAPPENED. pic.twitter.com/lqdIvyN2By

I’ll let the rage in my tweet there speak for itself.

Russell also offered this face palm of a comment from a guy who spent his rookie year at second base, and has been a middle infielder in the big leagues for four and a half years now:

Russell said getting experience on a play like that is "huge" going forward since he hasn't played a lot of second base.

Fine. Go back down to Iowa and get some more experience playing second base, if that’s what is needed.

Look. I’m fired up about the Cubs losing that game (and dozens that preceded it) for so many reasons beyond just one boneheaded play by Addison Russell. But when a guy is here – despite a domestic violence suspension – getting starts at second base primarily for his glove, and he makes a mental mistake like that in a moment like that? And then he stands by it in opposition to what his manager (correctly) wanted? What does “urgency” even mean at that point? What do we make of a team that has made plays like this all year, like it has become part of their DNA, rather than a total fluke? And it’s allowed to stand?

I really don’t understand how these kinds of things can keep happening with an established group of professionals. I guess I’m still just really frustrated about the loss last night, and I’m perseverating on it here. But you either mean it when you say changes are necessary or you don’t.