Just As Everyone Predicted, the Cubs End the First Half in First Place Skip to content 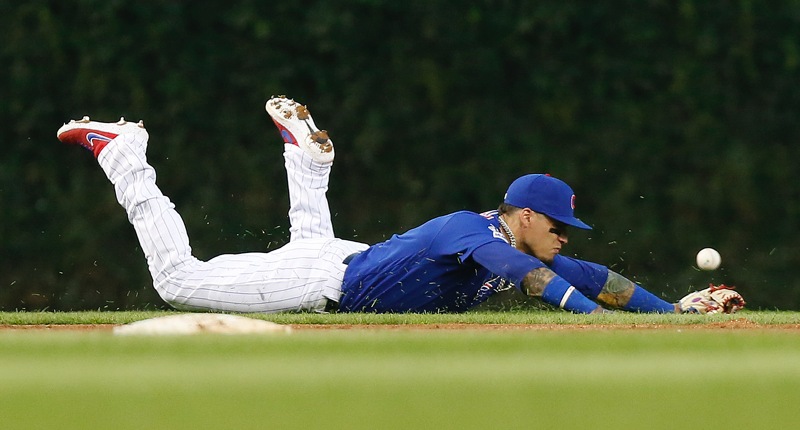 After starting the season 2-7, if I’d told you then that the Cubs would wind up in first place heading into the All-Star break, you would have very reasonably:

While number two might in fact be true depending on your predilection, that first one there, whoa baby, it is all kinds of off.

And that’s because another thing we would have predicted *did* come true, but extremely not in the way we thought it would. The NL Central indeed wound up the most competitive division in baseball in the first half, but no one should confuse “competitive” with “good” in this case.

By almost any objective or subjective measure, the NL Central was a very bad division in the first half. Consider this insane factoid about a stretch of time in which the Cubs did not win a single series:

Cubs have gone from tied for first to a half-game up in that stretch.

Kris Bryant: "I don't think what we've done in the first half is going to be good enough."

Thanks to that absurdity, the division is now historically tight: 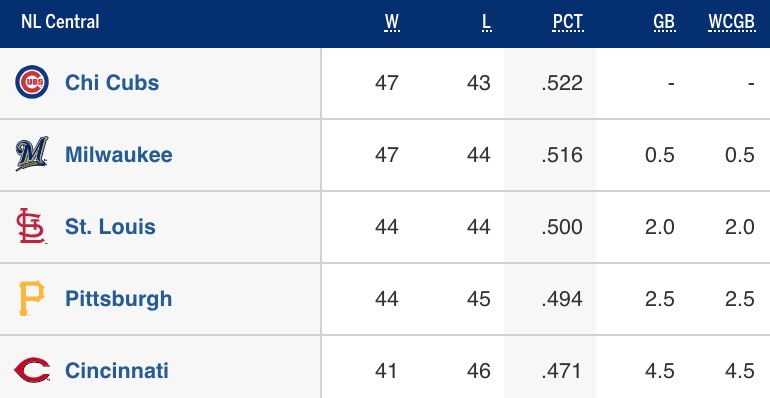 According to ELIAS, the only division with fewer games separating first and last place than the NL Central at the All-Star Break was the AL West in 2006. At the break, the Mariners were in last place, just 2.5 games behind the Rangers and A's. But it was only a 4 team division.

So, the Cubs fell bass-ackwards into first place at the break. There’s not really much to celebrate unironically, as the Cubs have not looked like a playoff-caliber team for over a month now.

And yet here they are, sitting in first place, where that seat gets you a trip to the division series in the playoffs. Earned it? Eh, not in the ways you’d have expected, but they’re here just the same. It’s a very, very, very fortunate place to be, all things considered.

If you’re looking for something outside of the standings, themselves, to feel good about in relation to the Cubs, I guess you could point to the +55 run differential, which is third best in the NL. There’s also the fact that the Cubs are the only NL Central club with a winning record against over-.500 teams.

Maybe the Cubs aren’t terrible. Heck, they almost certainly aren’t terrible. But if they’re going to hold onto this division lead in the face of other not terrible teams making a second half charge, they’re probably going to have to play a lot better. Maybe the rest in the schedule coming up will help. Maybe there will be a July addition or two. Maybe someone like Robel Garcia will keep raking and be a surprise boost to the offense, which will itself right the ship based on the talent therein.

If not – if the Cubs don’t have a run in them – then we’re in for a second half that features the Cubs hoping to cling to their bass-ackwards seat, or watching as one or two of the other NL Central poseurs actually turns it on and pulls away from the Cubs.