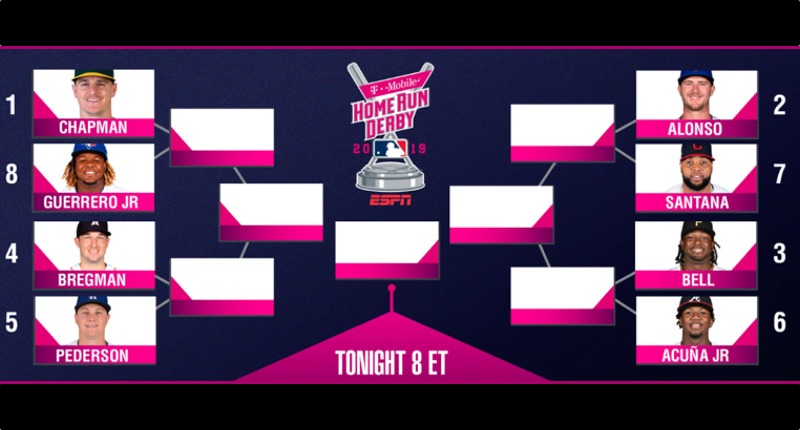 Hello, friends … I’d just like to welcome you to the All-Star break with a gentle reminder that IT’S TIME FOR THE MOTHA TRUCKIN’ HOME RUN DERBY! LET’S GO.

Not every baseball fan – or player – is particularly keen on the Home Run Derby, but those people are dumb. Long balls are awesome and I want to see a gazillion of them hit over the course of the night.

Unfortunately, unlike a couple of the recent derbies, the Chicago Cubs do not have any participants this time around. Javy Baez was scheduled to attend, but declined the offer to allow his heel to heal further. Another NL Central slugger, Christian Yelich, was also originally scheduled to perform, but dropped out because he’s a COWARD.

Here’s the updated bracket as we get set to ding dongs.

I have Chapman beating Guerrero Jr. (with sadness), Bregman beating Pederson, Alonso beating Santana, and Bell beating Acuna in the first round. After that, I think Bregman overtakes Chapman, meeting Bell (over Alonso) in the finals. And, as the winner of the 2019 MLB HR Derby, my guess is … JOSH BELL.

In case you’ve forgotten how the event will work or when it will begin, here are a few key reminders. But note, the full rules (intricacies, tie-breakers, matchups, etc.) can be seen here at MLB.com.

Format: The event will be a single elimination bracket, with three rounds on each side. Each batter will get four minutes/round to hit as many home runs as possible and the clock starts with the release of the first pitch.

Bonus Time: 30 seconds of bonus time will be awarded for hitting at least 2 HRs that go 440 feet or more – time is awarded at the end of the initial four-minute round and the clock cannot be stopped during bonus time.