Cubs After the Break Since 2012: Usually They're What You Want Them to Be Skip to content

We are right smack in the middle of the All-Star break, which means we’re on the backside of whatever feelings accumulated in the first half, and ready to be hurt again.

Historically, the All-Star break has marked a turning point for the Cubs under the current front office. When they were in the deepest part of the rebuild, they were bad in the first half, and fell off a cliff in the second half (which was fine at the time). When they started to turn the corner in 2014, that second half was actually pretty fun and nearly passable. Then, when Joe Maddon and the competitive window arrived, they were absolutely fantastic in the second half.

The lone exception to that trajectory was last year, as you remember all too well: 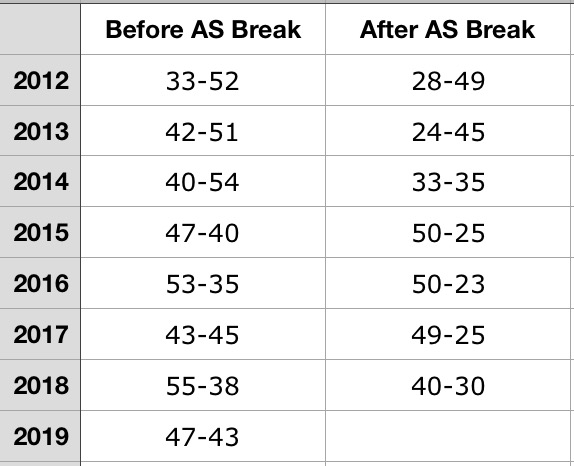 That is all to say … not much, really. What happened in past years in the second half doesn’t really prove definitively what might happen this year. Maddon’s teams are often better in the second half. Sometimes they’re not.

Shrug. To be honest, I kinda just wanted to lay out the numbers before the second half kicked off, and also to know how many they’d win if they just put up the same rate they did in the second half last year. Mission accomplished. Happy Wednesday night.