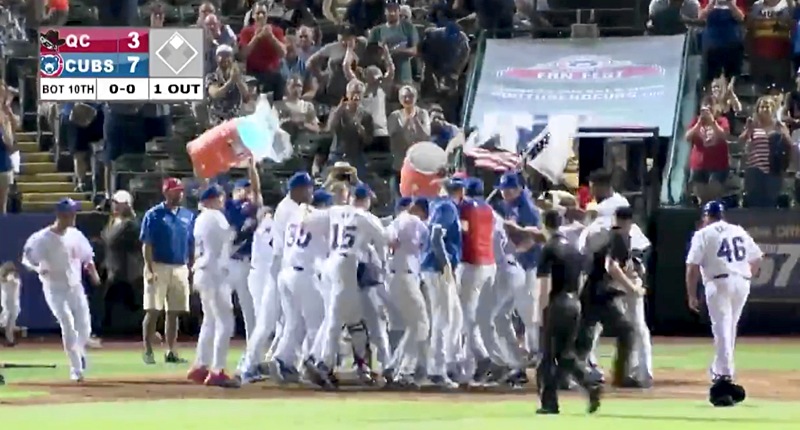 One of the best moments of the Cubs minor league season happened late last night. Down 3-2 in the bottom of the 10th inning, South Bend Cubs outfielder Brennen Davis hit a 0-1 slider well over the right field fence for the walk-off victory.

The @SBCubs win on a walk-off two run homer from @brennen7777, 4-3 over Quad Cities.@BKingSports on the call. pic.twitter.com/xfxIBQheAw

It is Davis’ fifth home run of the season, and the first opposite field shot of his career. Davis also added a couple singles for the first 3-hit game of his career. (Oh, and he also had a very deep fly out to right field.) Davis, in his first full professional season, is now hitting .307/.379/.490 as a 19-year-old in the pitcher-friendly Midwest League, a level that most thought he wouldn’t reach until 2020.

Davis, the Cubs’ second rounder last year, has flown up prospect rankings this year, and will be in the discussion for the system’s number one slot going forward. I have him second right now. He worked like crazy this winter to add muscle to his frame, while the Cubs worked to redesign his swing from the bottom up.

Davis now uses a short, quick, and very low stroke and shows impeccable bat control for his age. I think the key is what Jason points out above: his weight distribution is so much better, allowing him to elevate much easier. He’s gone from a guy that hit 53.7% of balls in the Arizona League last summer on the ground to just 36% with South Bend. [Brett: It’s almost funny how different his swing looks from last year. It was a mess, and I’ll admit I thought he was going to be a multi-year project. The fact that he transformed himself that much in a single offseason – after previously being a two-sport athlete who is only just now solely focusing on baseball – is enough to get my extremely hyped. Bryan is not overselling Davis, who must be considered right there in the Nico Hoerner/Miguel Amaya tier right now.]

I believe that Davis likely still has 20+ pounds to go in his strength development, and with a few other tricks from hitting coaches, should see his power grow significantly over time. If that can happen while maintaining some semblance of his 19.3 K%, look out. While I think he was drafted for his speed and athleticism first and foremost, I think we’ve seen a speed-for-power trade-off in body composition, and that’s a swap the Cubs will take every time.

Last week I was a guest on the Cubs Related podcast, and when they asked who I absolutely, positively didn’t want to see the Cubs trade in the next 17 days, it was a no-hesitation answer. Davis proves it more with every passing series.

Today we have a special edition of the Cubs Related Podcast. We are joined by @cubprospects of @BleacherNation to talk about the Cubs minor league system! We talk all things Cubs prospects, including the top name on Bryan’s no-trade list. https://t.co/5k7RroQXQq pic.twitter.com/eIWtTbBuLh