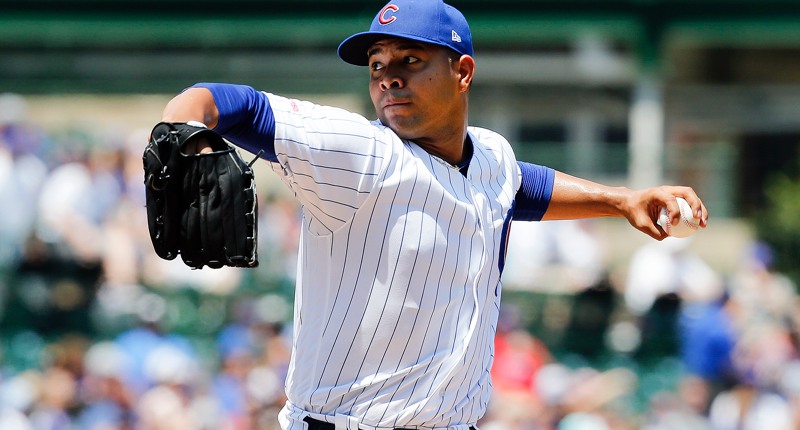 I think it’s pretty easy to agree that a little extra rest is going to help most starting pitchers, especially at this point in the season. What’s more difficult to discern, however, is the extent of the performance bump. Unsurprisingly, Cubs Manager Joe Maddon seems to think it plays a very big role, even if it’s particularly difficult to define: “It’s one of those nebulous concepts where you can’t wrap your mind around it. Except it’s true.” And how could you disagree, given the results?

No, he wasn’t racking up whiffs (just 5 all day) and he didn’t get a ton of ground balls (38.9%), but Quintana was effective yesterday, and earned himself a quality start and the win. And that start also marked his third straight solid outing in a row, which is especially great to see from him right now:

So how’d he do it? Well, soft-contact, mostly.

Throughout his performance against the Pirates, Quintana managed identical 21.1% soft- and hard-contact rates. Relative to his season, that was the LEAST amount of hard contact he’s given up in a single game and the fourth most soft contact.

Put another way: there were 18 balls hit over 100 MPH yesterday and just ONE (Bryan Reynolds’ single) came out of the hand of Jose Quintana. On the flip side, three of the four weakest hit balls were thrown by Quintana, who secured 8 balls in play with an exit velocity lower than 90 MPH. If you’re not going to strike a ton of guys out, you better get weak contact and that’s just what Quintana did against the Pirates.

And as it turns out, this has been an area of concern for Quintana this season – even in his two recent good starts he allowed a TON of hard contact – so I was very pleased to see him deliver on that front, in particular.

And according to pitching coach Tommy Hottovy, Quintana has his changeup to thank for the success: “A lot of what we worked on was just getting the changeup back to where we want it,” Hottovy said via The Athletic. “It was a pitch that was good for him early in the season. It’s a pitch, it’s still his third pitch, but it’s something we really want to stay focused on.”

If you remember as far back as Spring Training, Quintana’s changeup has been an area of extreme focus this year, because without it, he’s essentially a two-pitch pitcher (fastball, curveball), which isn’t ideal. But yesterday, he threw his changeup 11.1% of the time. And although it netted just one whiff and three strikes total (-0.1 value (middle of the pack for him)), it can really set him up for success with his fastball.

And whaddaya know: Quintana’s fastball registered a 1.5 rating yesterday, which is top-5 for him in a single start this year.

I don’t want to give too much of The Athletic’s piece away, but I definitely suggest checking it out. Hottovy explains how he and Quintana worked with Cole Hamels, among others, to brainstorm ways to “kill some of the velo and take that spin off” Quintana’s changeup to give it more distance from his fastball. And for his part, Quintana said the adjustments have worked.

Hottovy also goes on to explain that they’ve been working to close the gap between Quintana’s horizontal and vertical release points for his changeup and fastball (so they look like the same pitch for as long as possible), which brings us back to the idea of rest. “When you see guys’ extension start to go down or pitch traits start to change, a lot of that happens with fatigue,” Hottovy said.

Now, obviously, Quintana will not have the benefit of an All-Star break between any more of his starts this season, but the Cubs do have the benefit of three more off-days this month, alone, plus three more in August, as well. And, of course, that’s not the only way to stretch the rotation: “The six-man rotation when we’re all well is very attractive,” said Maddon. “We have the off days this month to ameliorate that. But as you get further into it, if you get those six dudes that you like, it can make all the difference in the world down the stretch. Q’s a perfect example, I think, of a guy who really benefits.”

So for now, let’s be happy that Quintana kept the Cubs’ good times rolling and hope that – between off-days and a few spot starts here and there – he can maintain a level of freshness that helps him succeed with his changeup, and, thus, in general.