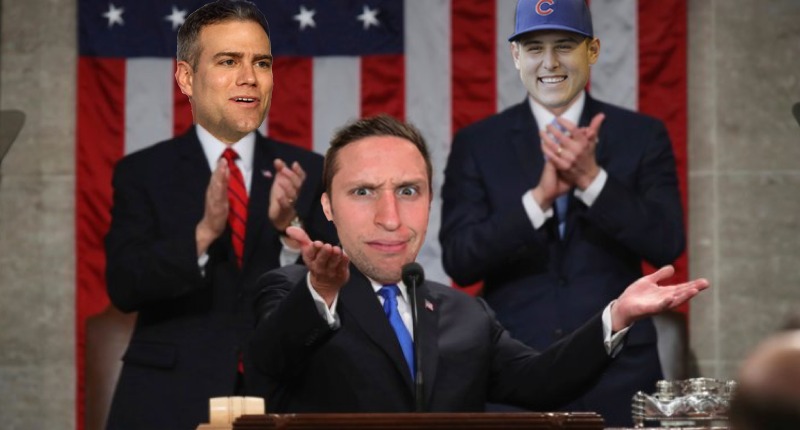 My fellow Cub fans. The state of this team is HOT.

Since stumbling into the All-Star Break just four games over .500, the Cubs have decided to start winning again and it’s been oh-so-fun to watch. Indeed, they’ve won five of their first six games in the second half, and are now eight games over .500 overall (the high water mark this season was eleven games over back on May 22nd).

The Cubs swept the Pirates and even managed to win a series against the Reds, who’ve been a thorn in their side all season long. Best of all, this winning streak has come largely on the strength of the starting rotation, especially Yu Darvish, despite playing without one of their best pitchers, Cole Hamels. It’s fun to be a Cubs fan right now. At the very precise, and possibly brief, moment. Enjoy it.

While the Cubs have gone 5-1 in the second half of the season, the Brewers (3-3) and Cardinals (4-2) haven’t been quite as strong, opening up a little breathing room in the standings. The Cubs 2.5 game lead is tied for their largest of the season.

And for what it’s worth, the Cubs’ Pythagorean Record (which efforts to project a should-be record based on the number of runs scored and allowed) and their Base Runs record (another similar system which works towards the same goal, but uses other, underlying metrics to get there) each believe the Cubs should have earned three more wins to this point. It stinks that they don’t have those wins banked, but it does imply that good times continue to lie ahead.

The Cubs offense, as a whole, has taken a bit of a step backwards since the last time we checked in on them. They’re still posting a very respectable 5.09 runs per game, but as we know that has come with some fairly severe inconsistency at times. The Rockies (5.49), Dodgers (5.41), Braves (5.32), and Diamondbacks (5.21) have all scored, on average, more runs per game than the Cubs in the National League and another 7 AL teams sit ahead of them, as well. Offense really is living large in baseball.

On an individual level, however, the Cubs continue to be well-represented. Kris Bryant (152 wRC+, 5th), Willson Contreras (142 wRC+, 14th), and Anthony Rizzo (138 wRC+, 20th) are each among the top-20 overall offensive performers in all of baseball – no other team can claim more than two. By contrast, this recent stretch has witnessed the steep decline of Javier Baez, who’s now slashing just .285/.318/.535 (115 wRC+). He’s still been valuable and I do believe he’ll bounce back in the second-half, but it has been a bit of a slog for him here lately.

It was impossible to pick just one of these guys. Bryant is currently out-producing his best offensive season – which is already saying a lot – while Jason Heyward is performing better than he ever has in a Cubs uniform. In fact, his 113 wRC+ is just barely behind Javy Baez (115 wRC+) … which is pretty bittersweet, but hey. Go Heyward.

The starting rotation has delivered nothing but quality starts in the second half of the season – and they’ve done it without arguably their best pitcher on the season, Cole Hamels, on the active roster. Indeed, the Cubs have gone through stretches without Hamels and Kyle Hendricks, but Alec Mills and Adbert Alzolay both stepped up to help out. It sounds like Mills might get another start before Hamels returns, but once the rotation is whole again, it’s not difficult to feel good about their potential down the stretch.

We’re going in a different direction with this section’s notable performer, but I do want to give a shoutout to Jose Quintana, who’s gone three straight starts with at least 6.0 IP and no more than 3 ER. His 14/3 K/BB ratio during that stretch looks great, as well.

Since the All-Star break, Darvish has delivered back-to-back dominant starts: 12.0 IP, 4H, 0ER, 1BB, 15Ks. And has looked generally dominant, turning his fastball up to 98 MPH at times. If this is who he is throughout the second-half of the season, the Cubs are going to be just fine.

The Cubs bullpen can still use a dominant left-handed arm, but the emergence of Kyle Ryan, the exit of Mike Montgomery, and the addition of Craig Kimbrel has started to re-shape the outlook for the rest of the year. If Pedro Strop can find some consistency (and some velocity), and if Carl Edwards Jr. can continue doing what he was doing before going down with an injury, you have to feel pretty good about where things stand.

Oh, and remember that while Steve Cishek (2.76 ERA, 42.1 IP) and Brandon Kintzler (2.27 ERA, 39.2 IP) have each given up some runs here lately, they’ve also been the Cubs two most valuable, consistent relievers all season. Without them, this team would be in a FAR worse place than they are.

Kimbrel has not exactly been perfect since joining the Cubs – particularly with respect to his command – but a little rust was to be expected given the way the offseason played out for him. And even still, it’s impossible to ignore his impact on the game. The 9th inning decision has officially been made for Joe Maddon, which allows him to better utilize Pedro Strop, Steve Cishek, and Brandon Kintzler in the 7th and 8th as the situation dictates. And, hey, the guy already has four saves – and his more recent one – yesterday – was a quick and efficient 1-2-3. If he finds a groove, just take the 9th inning off the table. Teams will have to beat the Cubs in 8.

The Cubs have three more games at home (against the Padres) before hitting the West Coast to face the Giants for three. After that, they have an off-day and begin NINE-straight games (with another off-day mixed in) against the Brewers (6 games) and Cardinals (3). That stretch could more or less define the entire season … and it’s right smack dab in the middle of the Trade Deadline. It’s going to be an interesting couple weeks. Strap in.