Yu Darvish Is Feeling It Completely Right Now, Once Again Notching His Best Start with the Cubs Skip to content 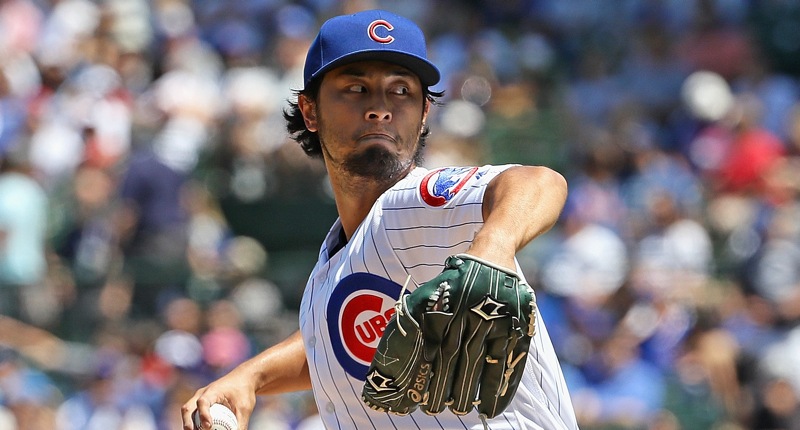 It finally happened, which means we can celebrate it – regardless of the efficacy of the statistic and the circumstances – and put it completely to bed.

Yu Darvish finally got a “pitcher win” at Wrigley Field as a Cub.

It only took a year and a half … we finally get to #FlyTheDoubleYu pic.twitter.com/DjXPyTwIys

I made that dang picture the day he signed, and then I had to sit on it for a year and a half. I feel like I was the real winner yesterday.

No, but seriously, Yu Darvish was fan-freaking-tastic again, notching his second straight dominating start coming out of the break: 6.0 IP, 0 R, 2 H, 0 BB, 7 K. By game score (79), it was the best start of his Cubs career … topping by one his start last time out (78). Get this: he hasn’t had back-to-back starts of at least a 78 in game score SINCE HIS ROOKIE SEASON.

With that in mind, it’s no surprise – and it’s been visually apparent – that Darvish feels as good as he’s felt with the Cubs, with as much confidence in all of his pitches as he’s ever had.

It’s been particularly notable on his four-seam fastball, which was wild as all get out earlier this year. He just wasn’t throwing it with conviction. It turns out, there was a reason for that, and for the shift we’ve seen lately. As Sahadev Sharma writes at The Athletic, “[The lack of walks] may surprise him, but as he recently admitted, it has a lot to do with his renewed confidence in the health of his elbow. After his last start, Darvish said that last season the pain in his elbow was at its worst when he threw his fastball. To start this year, he was very tentative with the pitch, which led to command problems. But that’s completely changed over the last few months as he regained confidence in his health, himself and his fastball.”

Fair enough, given how incredibly bad things got last year. That whole article by Sharma, by the way, is a great read. Darvish isn’t just confident and commanding all of his pitches right now, he’s also easily adding and subtracting and altering his slider, making it work very differently each time. It’s the version of Darvish we’d long been hoping to see.

Thanks to these last two scoreless starts, Darvish’s ERA is now down to 4.46, which is just about league average. Moreover, his walk rate has returned to a manageable level, his strikeout rate is excellent, and he gives up the third LEAST hard contact in all of baseball.

Why is his ERA only league average in that case? Well, he’s been really unlucky on homers. Were I evaluating him based solely on the season long numbers at this point, I’d say this was a guy who was pitching much better than average, and has been stung by some flukey homers. Heck, consider the three starts before the break: he was good to our eyes in every single one of them, but he gave up two homers apiece in them that accounted for pretty much all of the damage. That ain’t good – don’t get me wrong – but it’s also not necessarily a clear signal that he’s pitched poorly. It’s just something to keep an eye on.

Anyway, long story short: Darvish has been incredibly awesome in his last two starts, and he’s been awesome in ways that he has previously been awesome. He might be back to being that guy, so long as health stays with him.