Thank You, Padres - Or, How the Cubs Won Today (VIDEO) Skip to content 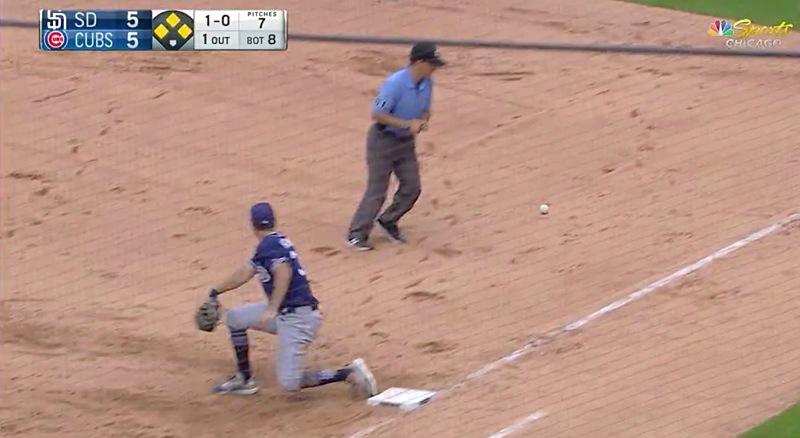 Today’s conditions were not ideal for a long baseball game, and with the Cubs up one late, I suspect everyone was desperately hoping they would close it out quickly and simply.

Pedro Strop ran into some trouble in the 8th, and the Cubs headed to the bottom of the frame in a tie game. And without a pair of gifts from the Padres, it would have remained that way into the 9th.

First, it was Fernando Tatis, Jr. throwing away a double-play ball that would have largely quelled the Cubs’ 8th inning threat before it began. That created sufficient peril that the Padres had to walk Jason Heyward to load the bases with one out, when David Bote chopped one to third, where Manny Machado could safely throw home. Catcher Francisco Mejia tried to turn it into an inning ending double play, which was ill-advised, but still would have been fine if Padres first baseman Eric Hosmer was able to catch the throw:

We find it best to not ask questions.

Take the run and run. pic.twitter.com/TU9Z9pSHZ9

Ah, free runs to win a game. Free wins, in that case! Thanks, Padres!

And I’m sure everyone was also thankful that it meant there were no extra-innings on such a brutally hot, humid day. Cubs win, and they’ll take it!