Cubs Have Reportedly Had Discussions on Tigers Closer Shane Greene, But I Have Big Questions Skip to content 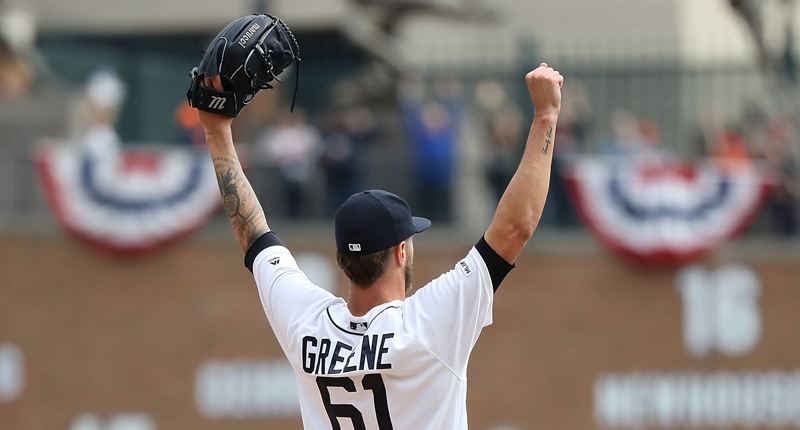 Although we passed upon this briefly in the context of the Nicholas Castellanos rumors, I want to zero in for a moment on the Shane Greene aspect.

The report from @cmccosky on the Cubs interest in Nick Castellanos is correct. There have also been discussions that include Tigers closer Shane Greene. To acquire both would be fairly costly. We are 10 days from the trade deadline.

Like every single trade season since man developed an opposable thumb and started chucking the ball around, the Cubs front office has sought additional bullpen talent and depth in July. Even having added Craig Kimbrel earlier this season, there is no chance that this year will be any different. The Cubs *will* try to add in the bullpen, and *very likely* will succeed in doing so.

In that respect, then, that they’d be attached to an eminently tradable closer – despite having a closer already – is not a surprise. It was just two years ago that the Cubs traded with the Tigers for their closer (Justin Wilson), with an eye toward making him a setup guy.

Generally speaking, when you throw in the fact that Greene is controlled for another year after this season, this rumor tracks with the front office’s MO.

That said, we know that the Cubs’ greatest bullpen need is for a really impactful arm against lefties. With only Kyle Ryan throwing from the left side right now, with nearly all of their talented depth at Iowa throwing from the right side, and without a huge reverse-split righty you can trust, it would be very nice to have a dominating lefty to add to the mix. There are a number of measures by which Greene, a righty, has actually been better against lefties than righties this year, but that’s not been a career-long skill for him. I don’t immediately see any reason why he’d be targeted as a dude who dominates lefties.

But that’s not necessarily a problem, right? I mean, at some point, you just get good pitchers when they’re available and figure the rest out later. And Greene has a 1.25 ERA, third best in baseball! So obviously he’s just dominant no matter what, and you should totally want him no matter what!

… er, well. Although there *are* some reasons to believe he’s been very good at managing contact this year, which will help his results outperform his peripherals, it is hardly the case that you can trust that 1.25 ERA to look anything like that going forward. The 30-year-old righty, who has had an ERA over 5(!) in two of the previous three seasons, currently sports a BABIP 130 POINTS below his career average. He’s also got a left-on-base rate 15 PERCENTAGE POINTS above his career average. I don’t care WHAT your batted ball data looks like, those are utterly terrifying numbers – some of the most unsustainable marks I’ve seen in a long time for a pitcher in late July. It is at least as plausible, based on his history and his luck this year, that he’s going to seem like a “terrible” pitcher from here on out as it is that he’ll seem like a “dominating” one.

Instead, he’s probably just going to be a pretty solid reliever. His 28.0% strikeout rate is good, as is his 7.7% walk rate. He’s been stung by the long ball this year, but he gets a lot of ground balls and generally limits hard contact well. A closer type on a contender? I really doubt it. A guy you’d happily put into the mix as a second or third setup arm? Yeah, sure. A guy you’d pay through the nose to acquire? No, sir.

And right now, the reported price tag on Greene is utterly laughable.

Per Jamal Collier, the Tigers have asked for top Nationals prospect Carter Kieboom, a 21-year-old shortstop raking at AAA and a top 20 prospect in baseball, in exchange for Greene. If true, that is not even a good faith ask. It’s the kind of over-the-top ask that tells me you aren’t serious about trying to put a trade together right now.

Which, whatever. The Tigers have Greene for another year, so they could hold him and see what’s what in the offseason. But it seems to me Greene’s value will never be higher, and they could get a very nice return if they get realistic.

Paired with Nicholas Castellanos for a Kieboom-level return? Yeah, maybe so. But I’m not sure I’d want to see the Cubs parting with Nico Hoerner-plus in order to try to get Greene for a year and a half. And Castellanos might not be enough added on top for me to change my mind.