Another Rental Righty Outfield Bat on the Market? Yasiel Puig a "Strong Candidate" to Be Traded Skip to content 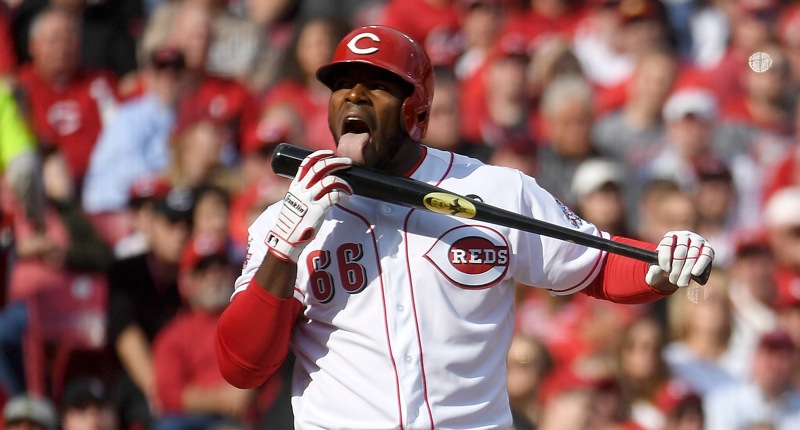 On the one hand, any outfielder with a potent bat who comes onto the trade market *has* to be noted by the Cubs. They have a near dire need to add to their lineup/depth, so no stone can go unturned.

Moreover, if it’s a righty bat who hits well against lefties, and is a mere rental, it’s all the better!

… but, obviously, when the guy who has become available is Yasiel Puig, there are a lot of other considerations.

To be sure, I don’t really mean the superficial talking points about Puig over the years – I think, for the most part, he’s improved on some of the off-the-field shenanigans of his early days with the Dodgers, and his on-field antics are, in my opinion, mostly harmless and enjoyable. Instead, I’m wondering about the considerations specific to the Cubs.

First of all, the rumor, per Ken Rosenthal, is that the Reds are thinking more along the selling lines now, and “Yasiel Puig appears a particularly strong candidate to be moved.”

But does that mean the Cubs would be interested in Puig, given the player fit for their needs? I’m not so sure. But his availability is nevertheless good news for the Cubs.

About the fit. For one thing, as a division competitor – and one without a deep long-term rebuild ongoing – the Reds may not be a great fit for the Cubs to send prospects to (especially if the Reds prefer near-term pieces). For another thing, the Cubs and Puig had a pretty significant flareup just a few weeks ago, with Pedro Strop not only hitting Puig with a pitch, and Puig not only erupting into a fiery hot rage, but also Strop declaring it was “no secret” that Puig is “stupid as (expletive).”

Could these guys get over (as well as anyone else in the clubhouse who has a beef)? Yeah, probably. Is it an extra risk to trying to incorporate a guy into a clubhouse at midseason? A process that is already a little tricky? Yeah, it definitely is. Maybe too much to overcome.

Puig, 28, is a lot like Castellanos. He’s making just about $10 million this year, in his final season before free agency. He is historically a solid hitter overall, but has hit lefties better this year (.273/.329/.494, 107 wRC+). For his career, though, Puig actually has a really strong reverse split, handling fellow righties much better (132 wRC+) than lefties (109).

Defensively, Puig is a corner outfielder – like Castellanos – but a much, much better one. Overall, he’s right around average, but capable of some impressive plays.

Total value as players? You know, it’s actually probably pretty darn close. And that’s a good thing, even if the Cubs aren’t into Puig – because it puts another very similar rental bat on the market, which could help the Cubs in the competition department, as discussed earlier this morning.

Consider, when I looked at the price tag on rental bats in recent years, the one variable that is impossible to predict for a given year is just how much the market composition that year will impact price tags – if Castellanos is *THE ONLY* decent bat available, then of course his price tag will skew toward the higher end of the spectrum. I don’t think he will be when all is said and done, and the presence of more guys like Puig will help.