Anthony Rizzo (Ejected) and Kris Bryant (UPDATE: Sore Right Knee) Are Out of the Game Skip to content 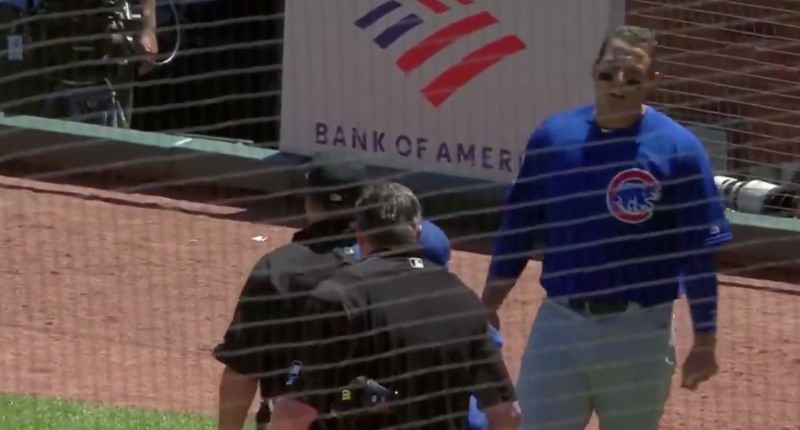 I’m not entirely sure why Anthony Rizzo was ejected from this baseball game, because – at worst – he had some bad words to say under his breath as he walked back towards the dugout after striking out.

Anthony Rizzo tossed from this one… definitely not a happy guy right now pic.twitter.com/DByufo0m2X

And that’s when things got even more confusing. When the broadcast returned from commercial, the Cubs announcers, Len and J.D., were just working through the surprising Rizzo ejection when they realized that Kris Bryant had also been removed from the game.

It does not appear that Bryant, too, was ejected, so maybe this wince on his last swing hurt a little more than we realized? (UPDATE BELOW)

More coming on this… but it appears Kris Bryant was wincing after this last swing pic.twitter.com/wKAxmHecmy

For now, Victor Caratini is playing first and David Bote is at third. More when there’s updates.

UPDATE: Per Len Kasper in the booth, Kris Bryant exited the game with a sore right knee. We don’t know much more beyond that at the moment, but suffice it to say losing Kris Bryant for any period of time would stink … but it hurts especially bad given how hot he has been and the fact that the Cubs are about to play the Brewers and Cardinals in nine straight games. Sigh. Just when we got Willson Contreras back, too.

The good news, if you can find any, is that this injury is apparently not related to Bryant’s shoulder, which derailed his 2018 season.