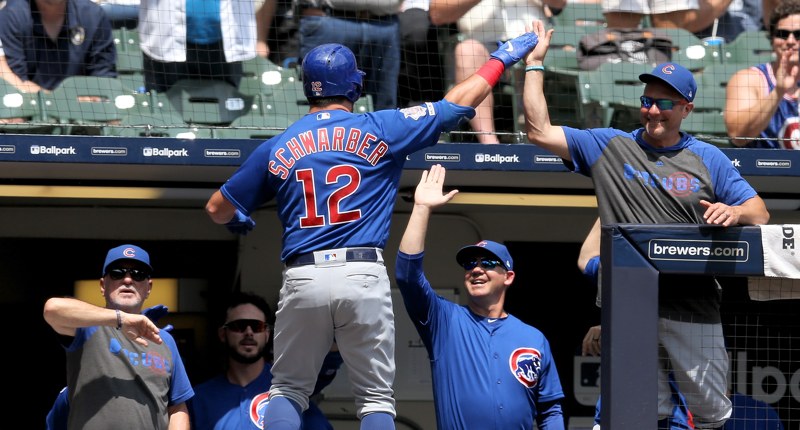 Overall, I think it’s fair to say it has been a disappointing year so far for Kyle Schwarber.

Following a really nice bounceback in 2018 – a developmental step forward, perhaps – Schwarber has been inconsistent this year in the results department, though a lot of that seems like a little less luck on balls in play. His BABIP is an abysmal .249, but he’s hitting the ball in the air, hitting it as hard as he ever has, and even is avoiding soft contact more than ever.

Heck, he leads the Cubs in average exit velocity, and is 12th in baseball:

The Cubs leader in average exit velocity, and 12th in baseball is an Absolute Lad. pic.twitter.com/tukNzRTchM

It’s no surprise then, when it comes to his expected statistics, Schwarber leads the Cubs in the disparity between his actual and expected results. Based on how he’s striking the ball, his results “should” be a whole lot better (29 points of wOBA). This was an issue for him last year, too, which leads me to suspect there is some kind of explanation – directionality and a particular susceptibility to the shift, far beyond other hitters? – but I don’t have my hands around it entirely.

Schwarber gave his line a huge boost yesterday in the results department, though, ripping two homers, adding a single and courageously taking a pitch off his body.

More from the fun day:

It's the Cubs' longest HR this year.
And the longest grand slam in MLB since Statcast's intro in 2015. pic.twitter.com/xJ2erWkEw8

That grand slam was the longest homer of this season by a Cubs batter. Measured at 473 feet per @statcast. Longest shot this year at Miller Park and tied for 12th-longer HR in MLB in 2019.

Grand slams this season for the Cubs:

The seven slams are the most in the NL. Astros lead MLB with 10. It's the most in one season for the Cubs since also having seven in 2008.

Kyle Schwarber has so much power that this resulted in a 390 foot shot to left center – and at first, he was looking up the left field line like maybe he poked a single to left. pic.twitter.com/uet4YdTwId