The Cubs entered the weekend series against the Brewers tied for first in the NL Central. Then they proceeded to blow two games in horrible fashion, and managed to win only the finale in the series. Another road series loss. They haven’t won a road series in their last nine tries. Everything is awful. Things are falling apart. Ring the nurse!

And the Cubs ended the weekend right back where they started: 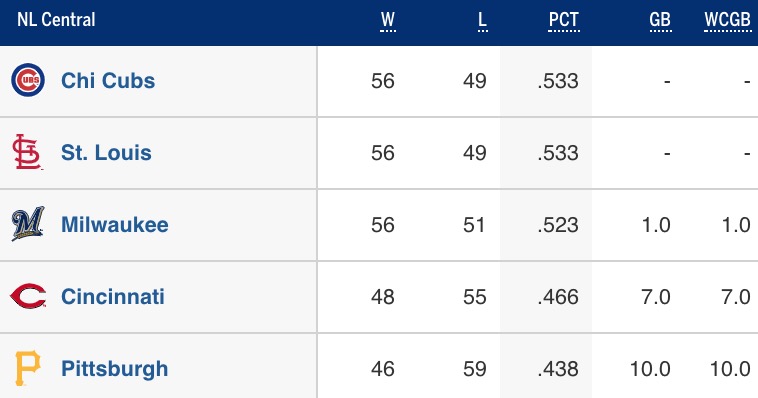 The Brewers were really the only winners this weekend, having pulled themselves a game closer to the Cubs and the Cardinals. All three are off today, so things will look just like this when the Cubs head to St. Louis for a three-game series that just might end me (and not solely because the Blogathon takes place during the first two games).

The Cubs absolutely need to proportion their buying decisions – the aggressiveness – to their confidence that this is a team that can/will win the division, and they’ll have only one more game of input before the deadline.

From the team’s performance of late, I’m not sure they’re getting the best “SLAM THAT BUY BUTTON HARD” signals. But the Cubs don’t exist in a vacuum when it comes to winning the division – they also have to assess how they think the Cardinals and Brewers will perform going forward. From where I sit? I see three decent, flawed clubs that probably won’t take off or fall off without a rash of serious injuries or some inexplicable breakouts.

At that level, and tied atop the standings, the Cubs should still add pieces if they can do so reasonably. No, I don’t think now is the time to use top prospects for rentals. If some deal for controllable guys comes along that also would impact 2019, well then OK, sure, we can talk about using top prospects or big league pieces. Absent that, though, this strikes me as a club and a division that would justify adding only a nice bat and a nice arm.