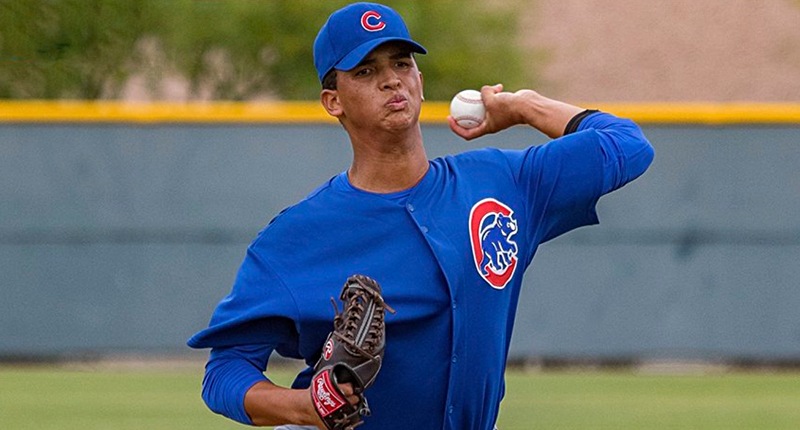 After trading three minor league starters in a slew of Trade Deadline moves, the Cubs had some minor league rotation reshuffling in order. In doing so, the Cubs have decided to promote red-hot top pitching prospect Brailyn Marquez to High-A Myrtle Beach, where he’ll take over the rotation spot of pop-up lefty Jack Patterson, who is being promoted to Double-A Tennessee.

Patterson leaves Myrtle Beach with a 0.00 — yes, zero point zero zero — ERA in 23.2 innings, with Carolina League hitters batting just .104 against him. Patterson was the Cubs June Pitcher of the month, and I can tell you right now that he’s going to win the July award as well. He has not given up an earned run in 34 innings dating back to to June 12.

It’s been so huge that Marquez has been able to stay off the Injured List all season and get really detailed developmental work. We see his slider have more consistent sweeping action, and he’s made a large stride in controlling at-bats. I look at Marquez 17 starts this season in thirds:

What really clicked in those final five starts, obviously, is his fastball control. Marquez owned the armside corner in his 14-K outing on July 25, while I thought he did a great job pitching inside to right-handed hitters in his six no-hit innings on July 31. His ability to get ahead in the count, when hitters can’t focus purely on timing the high 90s fastball, is paramount.

As for Patterson, what a whirlwind ride from not making a full-season team out of Spring Training, to joining South Bend in late April as a reliever, to now flying up to Double-A. The key for Patterson was a decision to throw his slider harder, giving it more separation from his curveball and emerging as a real big league pitch.

Patterson leads the system with a 62.8 GB%, as he has been able to really command his sinker all season. He’s also struck out 37 of 123 batters during these last nine games without an earned run, mostly due to getting ahead in counts and mixing up his breaking ball usage. Patterson is not just a good story, but a real prospect the Cubs are excited about moving forward.

There should be enough time for Marquez and Patterson to make about six more starts at their new levels, and in doing so, will help inform their 2020 developmental plan. The Cubs may keep challenging Patterson, not just with Double-A hitters, but perhaps with the Arizona Fall League as well. If the helium keeps flowing, Wrigley Field in 2020, in some capacity, is a possibility.

For Marquez, a good finish to the season will likely give national prospect outlets the reason to confirm what we already know: this is a top 100 prospect, and the Cubs minor leaguer with the highest ceiling in more than a decade.