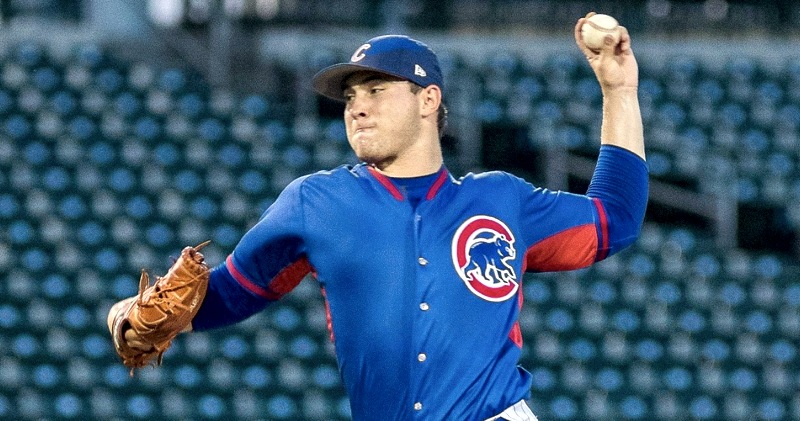 This one is a few days late, thanks to the Trade Deadline and a fun weekend at Wrigley. But I’m glad to be talking about the month in the wake of the Brewers sweep, when the decision to keep most of the horses of this farm system looks even better.

July is the month when the short-season leagues really start to demand you take notice, and I think the most eye-popping stats you’ll find below usually come from one of the complex leagues. Let’s hop right into it.

NTPM (“Not That Pedro Martinez”). There was belief in the Cubs system that this season would produce one breakout middle infielder in Arizona. Every single one had his supporters, but July left little doubt who that player would be. Martinez, a switch-hitting infielder from Venezuela, emerged on the prospect scene this month, hitting his way to Eugene (where he’s currently still on fire). Martinez doesn’t have the loudest tools, but he has above-average speed, and clearly very advanced bat-to-ball skills for his age. There’s more reason to believe in his power potential down the road than previous AZL breakouts of past (I’m looking at you, Reivaj), too.

I said a lot about Jack during this two-month run, so it’s hard not to repeat myself some. Patterson didn’t win Pitcher of June from me (Alzolay did), though he won the relief award, so this is his first time in these lights. What was so impressive about Patterson’s one-month stay in the Myrtle Beach rotation was that he didn’t lose anything that was making him successful in short stints in South Bend the previous month: copious groundballs, enough swing and miss, three very solid pitches. He’s pitching unintimidated, and he should be.

Catcher: Alexander Guerra, 22, AZL/Eugene. Stats: .338/.425/.824, 11 BB, 17 K, 80 PA. Another very valid player of the month choice (the most sabermetric crowd would throw a chair at me for not picking him), Guerra twice had 3-HR games in the month, on July 6 and July 16. A short, stocky backstop from Cuba, Guerra was just too advanced for the AZL, and thankfully has since been moved to Eugene.

First Base: Nelson Maldonado, 22, Eugene/South Bend. Stats: .392/.446/.514, 7 BB, 10 K, 83 PA. The 21st round pick became the first 2019 draftee to reach South Bend in late July, following a torrid stretch. Maldonado was the senior captain at Florida this year, and has drawn raves for the professionalism he’s brought so far. Talk about making an entrance.

Second Base: Pedro Martinez, 18. See above.

Center Field: Ian Happ, 24, Iowa/Chicago. Stats: .299/.445/.540, 23 BB, 23 K in 110 PA. We waited for the smallest signs of something, anything starting to happen in Happ’s development, and in July, he certainly made us take notice. Happ cut down on strikeouts, watched his walk rate explode, and had the most consistent power showing he had all season. I think clearly Happ arrived in Chicago with a little more confidence in how he was seeing the ball than when we last saw him in 2018. And that was really the whole point.

Starting Pitcher: Erich Uelmen, 23, Myrtle Beach. Stats: 28.2 IP, 22 H, 1.88 ERA, 6 BB, 27 K, 2 HR-A. It’s too bad that Patterson and Marquez were so superlative this month, because I would have been happy to give the monthly title to Uelmen. He was so much fun to watch, totally locked into his gameplan, and executing it start in and out. Uelmen’s confidence in throwing his slider to left-handed hitters this year has made a real difference, and he’s dotting his sinker. We’ll just have to see how loud the thud is hitting the Double-A wall in August.

Starting Pitcher: Cam Sanders, 20, South Bend. Stats: 20 IP, 7 H, 0.90 ERA, 6 BB, 15 K, 1 HR-A. Sanders is a really fun pitcher to watch, because I joke that I think he could touch every single mile per hour between 65 and 95 in a single outing. He throws a tremendously slow loopy mid 60s curveball, a slider, a change-up, and two versions of a fastball with different velocities. It’s clearly too much for Midwest League batters to handle, as their hitting just .106 against Sanders since late June.

Starting Pitcher: Brendon Little, 22, South Bend. Stats: 22.1 IP, 13 H, 2.01 ERA, 13 BB, 23 K. Boy oh boy did Little need a month like this. After a disappointing 2018, Little began the year on the shelf with a lat injury. When in Arizona, word came out that he looked a bit sharper, but it didn’t seem that way at first. However, in July he was really good mixing all three pitches effectively, and commanding when he absolutely needed to.

Two other starters that deserve mention: Ryan Jensen, Eugene, who has been a lot of fun in a small amount of innings. And Paul Richan, Myrtle Beach, who might have earned a spot but then was traded away.

Reliever of the Month: Rowan Wick, 26, Iowa/Chicago. Stats: 12.2 IP, 6 H, 1.42 ERA, 5 BB, 17 K, 0 HR-A. I think struggled finding the right player for this spot, and while it feels like slight cheating to award Wick, it really was his month. Wick was sent down after July 1, and dominated in seven Triple-A appearances, and by month’s end, had earned Joe Maddon’s difficult-to-earn high-leverage trust. But worth mentioning that Wick has not allowed a run in the minors since May 26 (during the longest outing of his career), and not in a 1-inning outing since early May. Nice scouting by the Cubs to find him dangling in a precarious spot at the back end of San Diego’s 40-man roster.

Previous Monthly Reviews: April and May and June