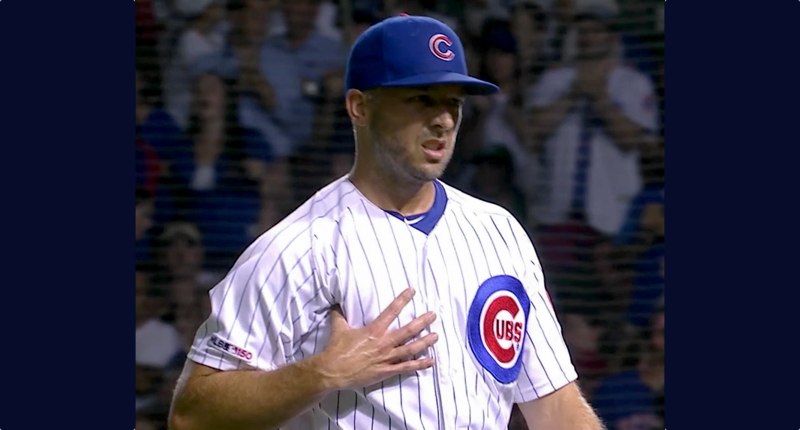 I hate to leave you on a sour note for the evening after a WHEW win for the Cubs, but a little news on Brandon Kintzler, who didn’t look 100% leaving the mound tonight in the 8th.

Here’s what we saw:

Not necessarily what you want to see from your currently most critical reliever while you also have a bunch of other injuries. pic.twitter.com/tLpg53S7U1

And here’s the confirmation:

Maddon confirmed that Kintzler did had discomfort in his right pec & was having it checked out after the game. Cameras caught him wincing and grabbing at it before finishing his night. #Cubs

Maddon said Kintzler has some discomfort in his right pec muscle. Cubs don't know anything more on his status at this time

Best we can surmise at this point is that he’ll get some preliminary evaluation done tonight, and maybe some treatment, but we (and he) might not know much until tomorrow. Sometimes you have to sleep, recover, and then see where you’re at. Sometimes that means you need a day or two, and sometimes it means, yeah, crap, I tweaked something.

In the meantime, I wonder if the Cubs will have yet another reliever waiting on standby for a call-up tomorrow if Kintzler has to join Craig Kimbrel and Pedro Strop on the Injured List … that’s a lovely thought.

Anyway, at least as of this moment the Dodgers are thumping the Cardinals. Goodnight!

‘Lil UPDATE: Sure enough, as expected: