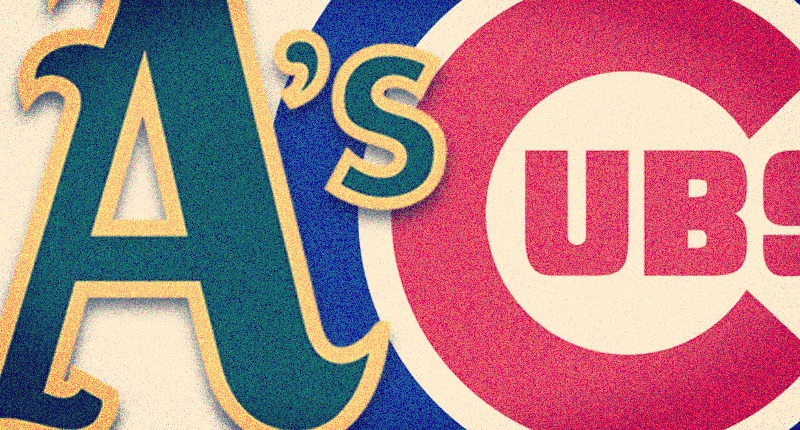 I both love and hate the A’s right now.

I love them because they just took two out of three from the Brewers, before taking two in a row from the Cardinals. And I hate them, because they’re a pretty darn good team, presenting a particularly tough matchup against the Cubs pitchers, in the middle of a pretty impressive second-half (14-7) and overall season (60-51).

Drilling down into that … the A’s will draw two left-handed starting pitchers this series (Jon Lester and Jose Quintana), which is too bad because their team-115 wRC+ versus LHP is the third highest mark in baseball (by contrast, they’re own just a 99 wRC+ against RHP). That makes full use of Kyle Ryan tricky … and almost any use of Derek Holland a criminal offense.

And it doesn’t help that the Cubs may have just lost another right-handed reliever. Good luck, guys, This won’t be an easy one.

The Chicago Cubs (60-51) just swept the Milwaukee Brewers at home, after a very tough road trip. They are in first place by 1.5 games, though, with under two months to go.

The Oakland A’s (64-48) have four more wins than the Cubs, but are staring at an 8.5 game deficit in their division (ouch … those dang Astros). They have won three in a row, themselves, though, and are just a half-game out of the Wild Card race.

Cubs Pitcher: Kyle Hendricks just delivered an absolute gem against the Cardinals (7.0 IP, 7H, 0ER, 0BB, 7Ks) and you would love to see him go off on his patented late-season tear right about now. And given what we said about left-handed pitchers versus the A’s this season, you hope this righty is on-top of his game.

A’s Pitcher: Homer Bailey hasn’t had a great season overall, but his four starts with the A’s aren’t all that bad. Well, sorta. He did have one absolutely disastrous game against the Astros (2.0 IP, 9ER), but other than that he’s gone at least 6.0 innings with three or fewer earned runs three times (18Ks to 4BBs).

A’s Player: Marcus Semien is swinging the hot bat in the second-half of the year: .291/.417/.557 (160 wRC+) with a greater walk rate (16.7%) than strikeout rate (15.6%). And, unfortunately, he’s actually carrying reverse splits this season, which means he’s hitting righties even better than lefties (the opposite of the rest of the team). So basically, when they’re set up to struggle, he’s in a position* to carry them. Cool (not).

*Note: Those reverse splits are unique to this season, and not indicative of his career.