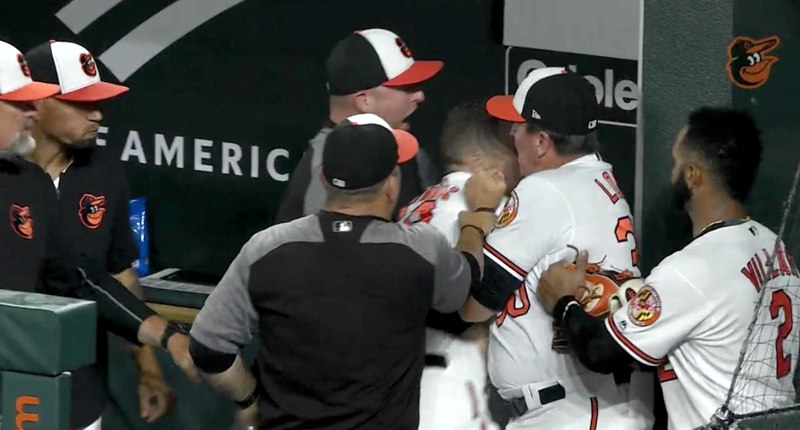 The Baltimore Orioles are – as expected – quite bad. At 38-76, they’re 37.0 games out of first place, and startlingly close to being eliminated from the postseason race in August. That’ll be wild.

It’s only natural, then, that tempers would flare amidst such a dreadful season, and managing that is among the unique challenges for new Orioles skipper Brandon Hyde, formerly the Cubs’ bench coach.

Apparently one of the things he also has to manage is making sure his own players don’t clobber him, because that’s what Chris Davis tried to do:

Yikes. After the game, Hyde passed it off as just a disagreement, and tensions are high, and all that stuff.

I’m sure there’s a lot of frustration in that dugout, not the least of which is about and from Davis, who is hitting .182/.269/.320 (55 wRC+) a year after hitting .168/.243/.296 (46). It is arguably the worst two-year stretch in baseball history for a guy who still sees regular playing time (it includes a record 54 straight at bats without a hit at one point). And he sees that regular playing time mostly because of the monster 7-year, $161 million contract he signed before the 2016 season. Since then, he’s been worth -1.2 WAR, and he is still owed another $23 million per year for the next three years after this one.