Cubs Build Healthy Division Lead ... Before Heading Back Out on the Road
Search
Skip to content

Whoever changes the NL Central flags at the top of the Old Scoreboard at Wrigley Field has been getting a workout this year.

Since the Cubs slid into first place back on May 5, they’ve slid back out of first place eight times, and they’ve seen the teams behind them flip flop as many times. Even as the Cubs have now built their largest lead in the division (3.0 games, which they did once before), things are still kind of a mess atop the standings and could shift at any moment.

Heck, even after being swept by the Cubs and falling way back, the Brewers took only one series to move right back ahead of the Cardinals: 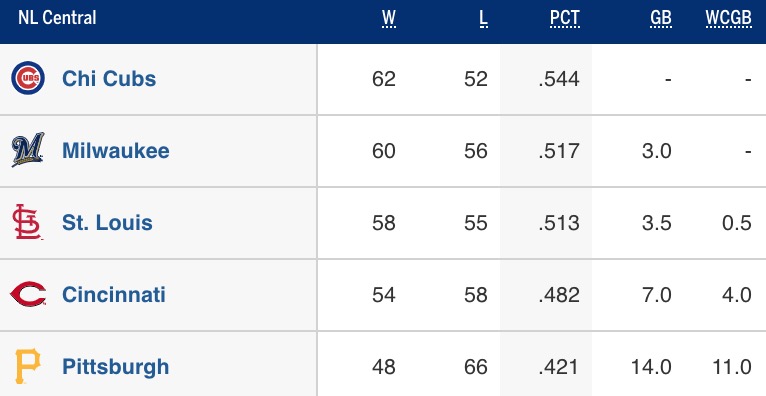 Now the Cubs head out to take on the Reds and their formidable rotation in Cincinnati for four games. Not so fun fact? Remember how I said the Cubs slid out of first place eight times since early May? The last seven of those eight times took place … on the road.

They’ve got more of a buffer than they’ve typically had, but the Brewers get to host the Rangers this weekend and the Cardinals get to host the Pirates. Those teams are also much better at home than on the road, so the Cubs will actually have to win some games on this road trip – four in Cincinnati, three in Philadelphia, and three in Pittsburgh – if they want to hold onto their decently-sized lead.