People Getting Excited About a Nick Castellanos Extension, But Theo Epstein Isn't Taking the Bait Skip to content 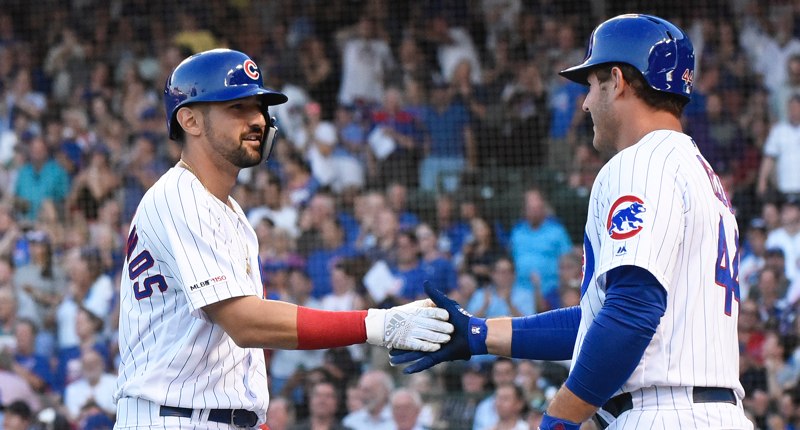 I totally get the instinct. A new guy shows up with high energy, great results, and maybe even better defense than advertised, and you immediately start wondering whether a two-month rental can turn into something longer.

So it is with 27-year-old outfielder Nick Castellanos, a guy who is otherwise slated to be an interesting but tough-to-value free agent. He comes with a high pedigree and a young age, but also inconsistent offense (that may or may not project better outside the one home park he’s ever had before), and a glove that has always rated as poor. Is that a guy who gets the sizable five-year, $100M+ contract because of his age and people buying the upside in his bat? Or is he a guy who gets squeezed by the shifting nature of free agency because teams fear he could turn into a poor-producing DH in a year?

It’s a conversation I can’t wait to have when he gets to free agency, because there are not big-time corner outfield bat prospects in the upper levels of the Cubs’ farm system that would make signing a guy like Castellanos an obviously foolish idea. And heck, he’s two months younger than Kris Bryant. So it’s not like he’s not an age fit for the core.

But, like I said, what fans actually want to talk about in these situations: can Castellanos be the rare rental acquisition who so falls in love with his new club – and vice versa – that he forgoes a fast-approaching free agency to just ink up right now?

Well, Theo Epstein got that question today on The Score, and obviously he answered directly! Nah, nah, come on now:

Theo Epstein on if the #Cubs considered long-term possibility of re-signing Nick Castellanos in trading for him: "It's inappropriate for any of us to be thinking about the long term … We're not ruling anything out or anything in. He's certainly made a good first impression."

There’s just no other answer Epstein could credibly offer at this time, even if he were desperately inclined to hope he could extend Castellanos. The reality is that, even if the Cubs wanted to make an aggressive offer right now, some guys simply want to go to free agency, especially when they’re this close, and especially when they’ve just been traded away from the only team they ever knew.

All that said, yes, there is a lot to like about the fit and the potential the Castellanos might also really dig things in Chicago:

By the way: anyone else think Casellanos was pretty impressed by the Wrigley crowd being loud and nuts in the 9th inning last night of an 11-4 drubbing loss? Gonna take a wild stab and guess that's not something he experienced in Detroit.

This is just a great all-around read on how Castellanos is fitting in, how he’s impressing his new manager, and how the Cubs are working on his defense:

Nicholas Castellanos seems to be just what the Cubs need — now, and maybe in the future? @PJ_Mooney: https://t.co/QYOEEhv24H