Man, the Pirates suck. And they better keep sucking this weekend when the Cubs play them.

Despite holding a four-run lead in the 7th, the Pirates imploded – mistakes in the field, multiple HBP, a manager asleep at the wheel – and wound up losing late to the Cardinals. It’s more fun when the Cubs win late.

The Brewers, meanwhile, did finally drop a game to the Rangers, resetting the NL Central standings thusly ahead of today’s off-day for the three teams at the top: 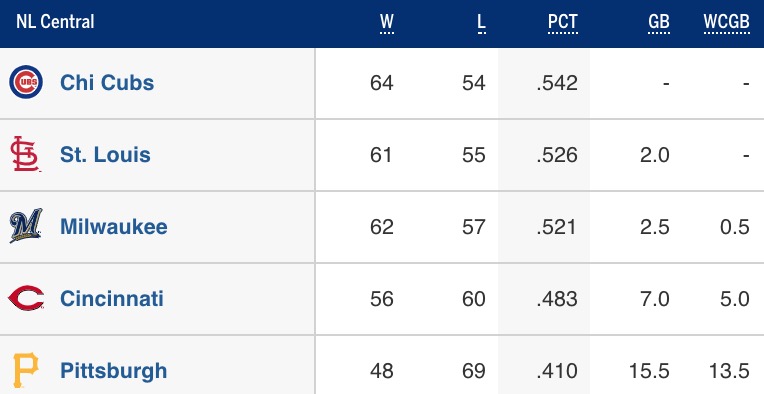 The Cubs, of course, head to Philly for a three-game set starting tomorrow, while the Cardinals go to Kansas City (hooray for interleague rivalry matchups!). The Brewers host the very good Twins, who just saw their AL Central lead vanish – they’re now tied with a crazy hot Indians team.

With the Braves and Dodgers all but having the East and West locked up, the only other race in the NL is the Wild Card race, which currently has the Nats and Cardinals on top, with the Brewers a half-game back, the Mets a full game back, the Phillies two back, the Diamondbacks three back, and the Giants three and a half back. The Reds are next at five back, though I’m sure what they’re mostly salty about this morning is the fact that if they’d held on to yesterday’s lead, they’d be just five back in the Central.