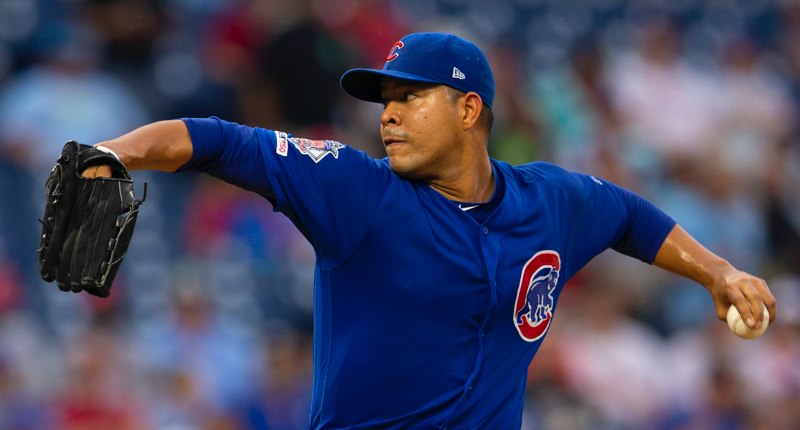 Thankfully, it’s not too hard to find if you just look at the pitching side of things yesterday for the Cubs. Not only did Jose Quintana toss one of the most dominating starts of his Cubs career, but the organization also had four of its top pitching prospects going at AAA Iowa, AA Tennessee, High-A Myrtle Beach, and Short-Season Low-A Eugene.

All five pitchers were brilliant:

Starting with Kohl Franklin, the big righty has been brought along very carefully after the Cubs popped him out of high school in the 6th round last year, averaging only four innings per start this season. But the results have been stellar for the 19-year-old (1.38 ERA, just 23 hits and 12 walks in 32.2 innings, and 41 strikeouts), and he sure looks the part:

Kohl Franklin hitting 96 on the gun with his fastball but it has been his curveball that has impressed me. Generating a ton of swings and misses and it’s got plenty of bite on it. pic.twitter.com/jxUek8j5da

Franklin showed what he's capable of last night, not only reaching the mid-90s once again, but I believe his curve looked the best it has all season. Meant he didn't need to rely on his changeup, and was able to change speeds and eye levels of the hitters more effectively.
2/6

There are the makings of three above average or better pitches, with his changeup already flashing as a plus offering, and there is still room on the 19-year old's 6'4" frame to add size and strength.
4/6

Franklin hasn't allowed more than 1 run in any start, and hasn't even given up more hits than innings pitched over his last 7. Franklin is punching out 30.6% of batters he's faced, and again, that includes a few games where the blister was clearly limiting his effectiveness
6/6

(Note, Cubs 2018 18th rounder Carlos Vega also had a solid outing at Low-A South Bend last night – four scoreless innings in his first start – but he’s being converted after a successful bit of relieving, and isn’t currently on the radar as a top prospect.)

Moving up the ladder to High-A, what can I even say about Brailyn Marquez at this point that you don’t already know? The 20-year-old flame-throwing lefty is the top pitching prospect in the system, and he’s simply in the kind of groove right now where opposing hitters cannot do anything. Absent injury, there’s no doubt at this point that Marquez is a future big leaguer who could – at worst – pair his 100 mph fastball with his wipeout slider and be an effective reliever.

One step up from High-A is fellow lefty starter Jack Patterson, who likewise continues to dominate every time he touches the ball:

Both are done for the day. Patterson allowed an unearned run in the sixth and was pulled with two outs. Marquez pitched a clean fifth.

Although Marquez has more prospect hype (justifiably so), Patterson’s breakout this year has been much crazier and a steeper climb. The 24-year-old lefty has gone from 32nd round pick just last year to successful low minors reliever to dominant AA starter in his first full professional season. We have not seen this kind of thing from a Cubs-drafted pitching prospect in a long time.

Last but not least on the pitching prospect side of things, there’s Adbert Alzolay, back from his biceps injury, and also back to dominating:

Here he is on the #Cubs' Top 30 Prospects list: https://t.co/bdu9gmcmvx pic.twitter.com/xTUu6WVltg

Alzolay, like Marquez, is a guaranteed big leaguer at this point if he stays healthy. But, like with Marquez, the question is whether he starts or relieves. Unlike Marquez, the bigger immediate question with Alzolay is not so much his pitchability – he’s got three big league pitches (fastball, curveball, changeup) – and instead, obviously, it’s his durability. He’s dealt with a series of injures the last couple years that have cost him a whole lot of time, and have also probably made it more challenging for him to keep repeating his mechanics. I wouldn’t be surprised if we see him up in the big league bullpen in September, and then see him competing for a big league job – rotation or bullpen – in the spring.

And, of course, there was Jose Quintana, flashing the kind of start we dream about seeing from someone who came up through the farm system. He did something only Jon Lester has done for the Cubs in the last 111 years, and set a career high in Ks in the process: