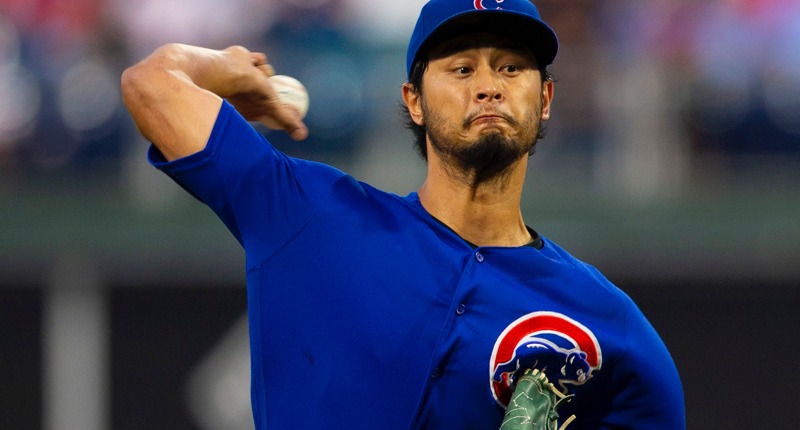 … But I can also understand why he isn’t quite getting it. His first season with the Cubs (after signing a massive $126 million deal) was a complete wash thanks to significant injuries to his throwing arm. And his second season started off, well, terribly: 33 walks in his first 36.2 IP with a 5.40 ERA. But make no mistake, if the Cubs weren’t finding creative and unique ways to utterly blow every single one of his starts over the past two months or so, we’d all be gushing over him right now.

He’s been a pretty special kind of dominant (historic, even) here lately, and it’s worth your biggest smile, even if you have to force it behind gritted teeth of disgust for the team.

I mean, come on, the guy did this one night before his 33rd birthday (which is today!):

If the Cubs front office was really searching for more strikes, fewer walks, and generally dynamic stuff when they signed Darvish, they found it. He’s freakin’ electric and very fun to watch right now. And as it turns out, last night’s start was his best in a Cubs uniform by Game Score (84) and among the top-10 of his career all-time, which is saying a lot.

It was also one of the best five Cubs starts of the entire season (t-4th with Cole Hamels):

But none of that is actually the most impressive part of last night’s outing/Yu’s recent run. In the intro, I dropped the word “historic” and it wasn’t by accident. Yu Darvish actually accomplished something last night and through this recent stretch of absurdity that has been done only one time before in MLB history (oddly enough by a recent member of the Chicago Cubs).

That’s right. Darvish is just the second MLB pitcher EVER to go four straight starts with no walks and at least 8 strikeouts. Here’s a look at those four outings, in that respect:

Dude. And the silliest part? That didn’t come out of nowhere. In the SEVEN starts before this four-game stretch, Darvish allowed just seven total walks against 51 strikeouts in 42.2 IP. He’s been absurd.

If it weren’t for an undoubtedly flukey (and mind-numbingly frustrating) 22.8% HR/FB ratio, which is nearly double his career mark, Darvish’s solid 3.38 ERA would look even better.

Without much time remaining in the season to improve his 4.21 ERA, history might not look back favorably on Darvish’s 2019 season as a whole, but you have to do your best to remember how dramatically he improved from Day 1 until now. And if you’re having trouble remembering all the right words to regurgitate this awesomeness to your friends over the weekend, I’ll leave you with a couple graphs that should make things easier: 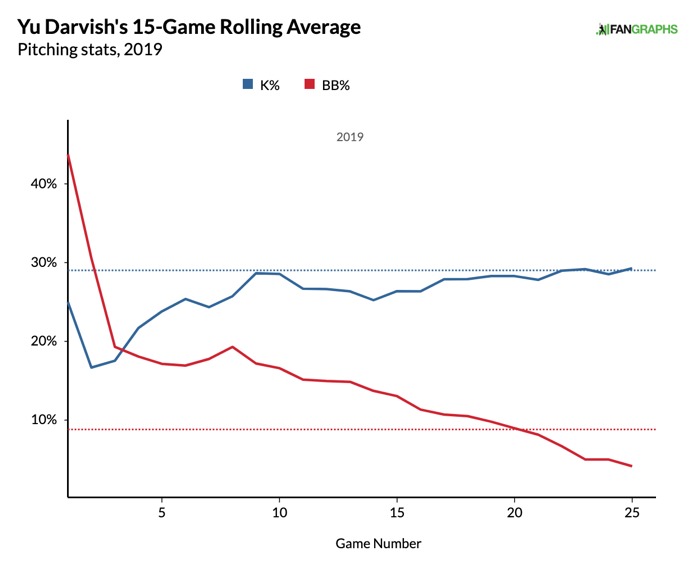 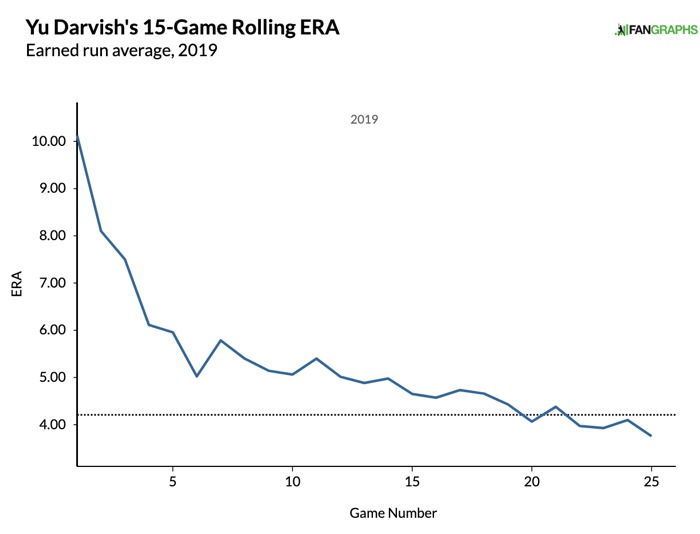