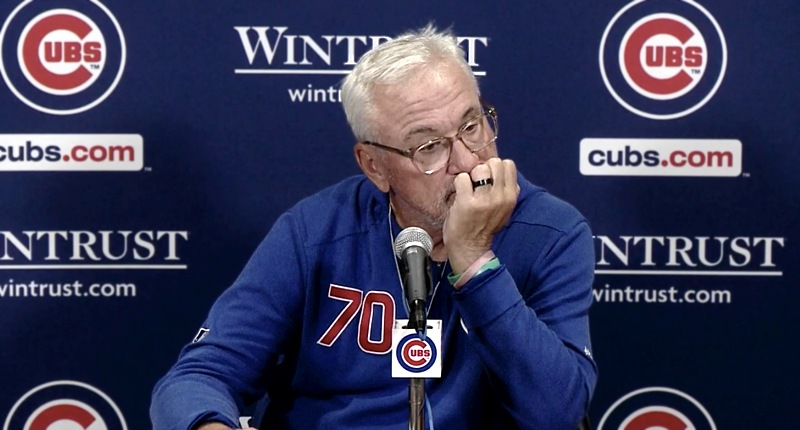 Joe Maddon has been the manager of a competitive, major-market team for almost five years now, so, yeah, there have been some fans saying “fire Maddon” since about day one, and carrying throughout in fits and spurts. That’s just the nature of the beast.

But as an avid observer of not only the team but the fan interplay with the team, I can tell you, without a doubt, that the last two days have been fundamentally different. It is everywhere. It is constant. And it is loud: “FIRE MADDON!!!”

I totally get the sentiment, especially coming from a fan base that is *justifiably* ticked off at the way the last two years have gone. We’re all kinda pissed off about a lot of things, and in the moments when the managerial decisions look dodgy – and there have been several recently that have impacted games – folks are gonna explode.

But again, this permeates a little more than that. It’s not solely a flickering burst of in-game anger. Well, it is that, and a lot more of it than previously, but it’s not just that. I also get the feeling that there are a lotta folks out there who want to see Maddon fired, today, as some kind of strategic approach to turning the season around.

And while I have no beef with folks who get angry in the moment and shout, I do have to disagree that firing Joe Maddon today is going to accomplish all that much.

For one thing, a new manager is highly unlikely to make a significant difference in wins and losses going forward on the basis of in-game decisions. Yes, I understand that it’s easy to look back with hindsight and say a hypothetical other manager would have led the Cubs to wins the last two nights, but it’s also possible that a hypothetical other manager would lose some games in the future that Maddon would not lose, because his in-game strategies are often so closely dictated by his relationships with the players and reading between the lines they offer (sometimes for worse, probably often for better).

For another – far more important – thing, Joe Maddon has this clubhouse. His players love him. There is no fracture there. And if you up and fire Maddon in order to, what, spark something?, you’re just as likely to lose that clubhouse even more, and really crater.

Unless there is something REALLY bad going on behind the scenes that is SPECIFICALLY ATTRIBUTABLE to Maddon, then I really don’t see the risk in firing him (for six weeks) being worth the extremely remote and extremely small upside.

Am I going to sit here and say Maddon should be extended right now? No. Once the front office decided not to extend Maddon last offseason, I have resigned myself to the idea that they truly would let this full year play out, evaluate the results and the internal information, and then proceed. I’m still fine with that approach. And if it results in the front office determining a change is necessary at the end of this season, then I’m fine with that, too. If Maddon is re-signed after this season, I’m to the point where I’ll probably need a little convincing that it’s the right approach at this time. I’m open to it. But that’s not the way I’m leaning.

Who knows, though. Maybe something clicks in these final weeks, and maybe it’ll prove to be attributable to Maddon, and the Cubs will be falling all over themselves to re-sign Maddon, and we’ll all be on board, too. That, to me, seems more likely than a firing right now somehow magically making an actual change in player performance and game outcomes.