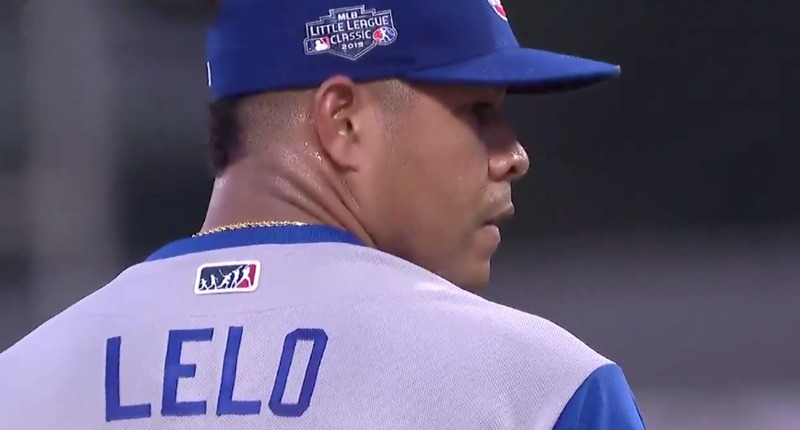 The Cubs (1) won a series, (2) on the road, (3) against a team in their division. It’s remarkable, I know. But for however remarkable (sad?) it may be, it’s hardly my favorite takeaway from the weekend.

Instead, that distinction belongs to Jose Quintana, who’s been a freaking monster for a fairly long time now. In fact, I think you’ll be pretty surprised just how long he’s been very good (and how good his season, as a whole, now looks) …

… But let’s start with last night, before we get ahead of ourselves:

That’s good for a Game Score of 79, which he’s beaten only twice this season. Even Pirates Manager Clint Hurdle had to admit that Quintana’s effort last night was the best they’ve ever seen of him, which is quite the compliment from a team you’ve faced four times this season (and from a guy like Hurdle, who’s not known to be the most overly friendly manager in baseball).

Interestingly, though, Hurdle complimented Quintana’s changeup after the game last night, but Q actually threw it only 3.3% of the time, which is well below his season-average of 10.5%. Perhaps it was particularly effective, because it was used so sparingly, but it’s hard to know for sure. It’s also quite possible it was a charting issue thanks to the ballpark.

That purported drop in changeup usage came alongside a heave rise of his fastball from 62.8% for the season to over 70% last night. Unfortunately, we don’t have any data on the velocity of his pitches last night (or spin/release point/etc.), because the game was played in the Little League Classic stadium, where there’s no Statcast tracking (what is this, like 1983?!). But we do know – thanks to Cubs Insider – that Quintana started throwing his sinker up and in (instead of down in the zone) for the past several weeks and that’s coincided with more swings and misses on both that pitch and his changeup, which is likely to have played a role again last night.

But let’s leave his start against the Pirates there for now, and widen the scope a bit, because that’s where things get fun.

Since being blown up by the Mets in the middle of June (10 starts ago), Quintana has been on a a tear. Over 54.2 innings pitched, he’s allowed just 18 earned runs, which is good for a 2.96 ERA. More impressively, he’s struck out 57 batters over that stretch (25.9% K-rate) against just 7(!) walks. And not that this was ever entirely within his control, but Quintana did go 7-0 during that stretch.

That brings us to his season-long numbers.

So far, in 2019, Jose Quintana is the proud owner of a 3.91 ERA, which, in this era, is 12% better than the league average qualified starter and ranks 35th overall in MLB. But better than that is Quintana’s 3.71 FIP, which ranks 21st in MLB – just behind Justin Verlander and Madison Bumgarner, and just ahead of Marcus Stroman and Max Fried. That’s good company.

Thanks to the substantial inning total that comes alongside 25 healthy appearances (24 starts), Quintana’s 3.1 WAR is among the top-25 in MLB. Yes, fWAR may be an imperfect stat, but it doesn’t tell you nothing. Even if you don’t believe Quintana actually has been one of the 25 most valuable starting pitchers this season, he’s probably pretty darn close, which says more than enough.

Quintana will probably never satisfy the most critical fans of the trade that brought him to the North Side of Chicago, but he is certainly providing a LOT more than just healthy, passable, 32-start seasons. Lately, in particular, it’s been pretty fun to watch.