Must-Read of the Day: Tommy Hottovy and Cole Hamels on Out-of-Whack Mechanics
Search
Skip to content Luis and I have another episode of Outside the Ivy tonight after the Cubs game, but that’s a little bitter-sweet. On the one hand, I’m excited to get back on the air after missing our last episode for the John Mayer concert (the wife is a die-hard fan). But on the other hand, the Cubs have lost before each and every one of our last *NINE* shows (…the curse is real).

But I’m a man of math and science. And I don’t believe in no stinkin’ curse. Instead, my biggest concern tonight has to be Cole Hamels.

Tonight will mark his fourth start since coming off the Injured List at the beginning of August, and things haven’t gone all that well for him so far:

Sure, his first start was just fine, but Hamels allowed 13 runs (12 earned) over his next 5.0 IP with an equal number of walks and strikeouts. You immediately start to wonder whether he returned too soon from his oblique injury (a concern he had, specifically, when he went on the IL – wanting to make sure he didn’t repeat the mistake he made back with the Rangers).

And that’s why Sahadev Sharma’s excellent article at The Athletic yesterday (including a transcribed conversation with pitching coach Tommy Hottovy) was so well-timed before Hamels’ start tonight, and you’re gonna want to read it. Sharma goes back and forth with Hottovy regarding Hamels and his recent struggles, and gets specific on what went wrong, why, and how they’re planning to address it.

Speaking of which, here’s Hamels, himself grazing the surface of the wide-range of issues: “It just didn’t feel right. Mechanical issues can lead to anything. When you identify it, correcting it is the next step. We were able to find a lot of different things over the last couple weeks. It’s just been a slow process of trying to implement them into my daily regimen and then try to put them into game speed.”

According to pitching coach Tommy Hottovy and Hamels, himself, the veteran’s mechanics are out of whack, including everything from extension, to release point (there are some nifty graphs on that one, you’ll want to check out), to timing.

Specifically, Hamels’ horizontal placement on the rubber is one of the key things they’re tweaking, though you’ll have to check out Sharma’s article for more.

For a possible early bit of visibility to whether the mechanical tweaks are taking root, we could look to Hamels’ velocity; last year, when he finally worked through his troubles, not only did his command and results improve, he also so a very noticeable bump on his fastball. It’s extremely easy to see how that played out last year, and how it’s playing out this year: 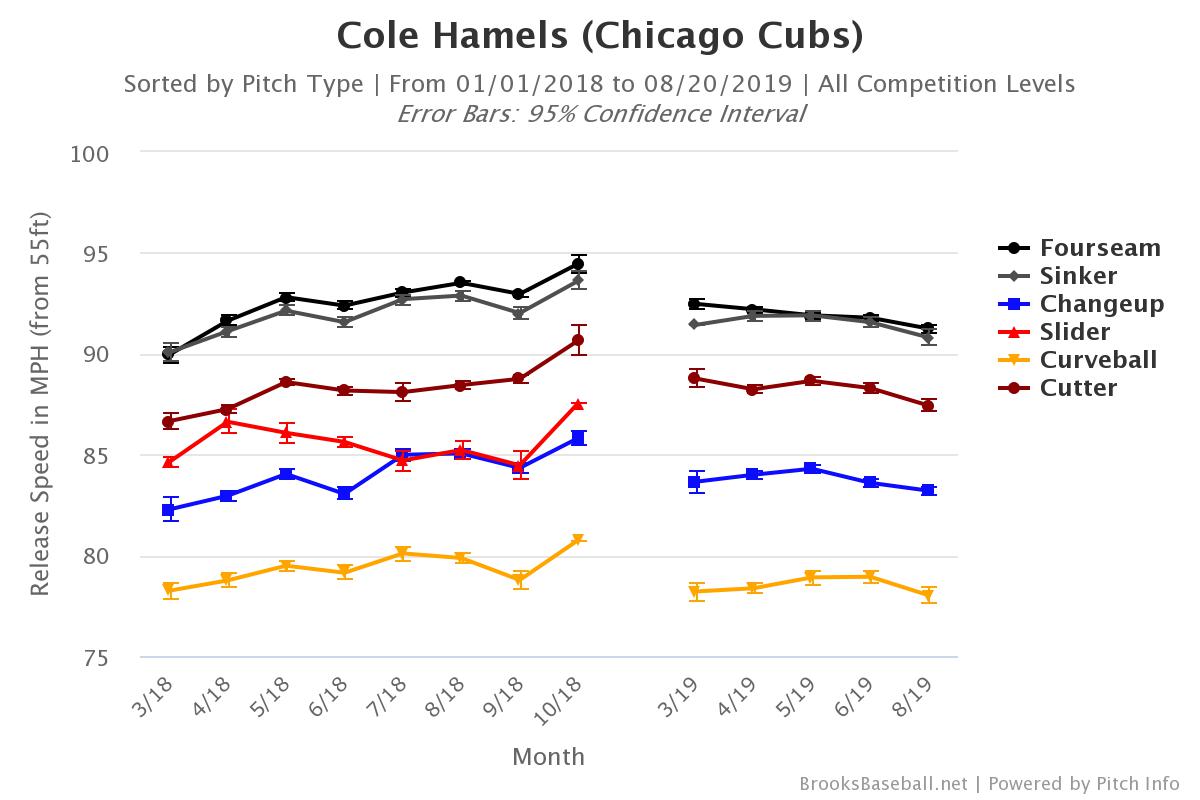 On a slightly unrelated note, I did find this particular comment from Sharma revealing and interesting: “You can look at each game individually and see slight changes in Hamels’ horizontal release point. As Hottovy told me, these are the types of issues you ignore at the time because you can’t overwhelm a pitcher with a thousand issues just because you have the technology to notice them.”

What an important and thoughtful consideration from Hottovy. Obviously, things didn’t exactly work out this time around (for example: maybe he should’ve said something sooner), but I do like to see that sort of self-awareness. We live in a time with unparalleled sports tracking technology. Using it is good. Overusing it – on a veteran like Hamels – is probably not.

In any case, for that and more information on what to look out for in Hamels start tonight, make sure you read Sharma’s latest.

On the year, Hamels has a 3.69 ERA over 109.2 innings. His peripherals more or less match his success, and by ERA- and FIP-, he’s been 17% better than league average so far this season.