Rain suspended play in last night’s mostly insignificant game between the Tennessee Smokies and Jackson Generals in the fourth inning, a game that will be completed as a seven-inning affair today. When the statistics go official in that contest, the game will become noteworthy for one reason: the three strikeouts Cory Abbott logged in three innings of work.

With those three strikeouts, Abbott will become the first pitcher at the AA level to 150 strikeouts. He will also become the only Cubs pitcher in the minor leagues this decade to reach 150 strikeouts. Chris Archer came closest, getting to 149 in 2010. The Cubs haven’t had a minor leaguer pass that number since 2006, when Donnie Veal and Sean Gallagher both surpassed 170.

SmokiesCenter 8/15 vs Jacksonville: ICYMI — On a wild night at the ballpark, Cory Abbott and Jared Young punctuated a dramatic double-comeback for the Smokies. pic.twitter.com/onSf4b4aIS

And no, that hits allowed number isn’t a typo. Abbott hasn’t allowed more than three hits in a start since June 29, good for a .134 BABIP. Always a flyball pitcher, Abbott has upped that number in the summer, and managed to do so without seeing a spike in his home run rate.

This will be the question going forward with Abbott, especially going into 2020 as he enters the lands of the juiced ball. Can he limit the home runs? Abbott’s fly ball rate is a career-high 47.2% this season, and has been north of fifty for most of the summer. His 9.5 HR/FB% isn’t particularly high, as his xFIP and ERA matched at 3.38 before yesterday.

It’s clear that Abbott tunnels well, that hitters struggle with the spin on his four-seam up in the zone (90-94 mph), the look of his cutter off that pitch, and the look of his curveball off that cutter. He plays around with breaking balls up in the zone, a more modern introduction in the loft angle age, and is finding success with it, even while his ability to command that pitch wavers.

Command has been the strangest storyline of Abbott’s season by a long-shot. Courtesy of Minors Graphs at Prospect Live, here is a rolling 10-start snapshot of Abbott’s BB% in the last two years:

Whoa! This was really unexpected, and is a big reason I backed Abbott down my prospect rankings earlier this month. Without huge stuff, Abbott needs command, and it was a real red flag. Diving into the video, I am confident that this change to throw more high breaking balls is at least partially responsible, and I’m calmed by the fact that the walk rate is back down to 5.9% in August.

The other question he’ll need to answer going forward is against lefties, who serve as the primary culprit of his home run issues. Abbott has allowed just 4 home runs in 306 plate appearances against right-handed hitters this year, but 11 in 234 PA’s against LHH.

We can see how lefties have been able to pull home runs against him in his hits allowed chart at Baseball Savant: 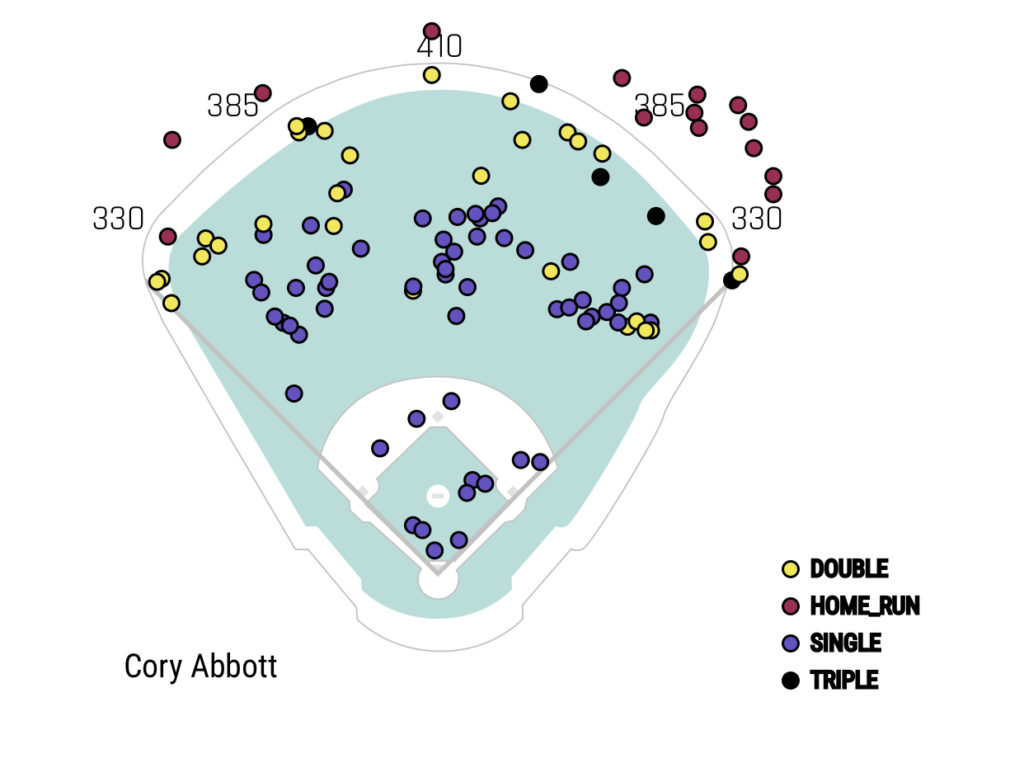 This is something that will get worse at more advanced levels, and is something the Cubs will need to help Abbott find a solution for. The good news is that his overall approach against lefties is successful, they’ve hit just .211 against him, while striking out at a higher rate (30.8%) than he whiffs right-handed hitters (24.5%).

Abbott has now been the Cubs’ most consistent starting pitcher at the minor league level for two years, following his second round selection in 2017. During that time, he leads the system in ERA (2.97) and strikeouts (278). Abbott continues to befuddle hitters, and I look forward to the adjustments he makes this winter to prepare for the levels ahead. He’ll spend next season working to convince the Cubs to leave open their fifth starter spot in 2021 for him.