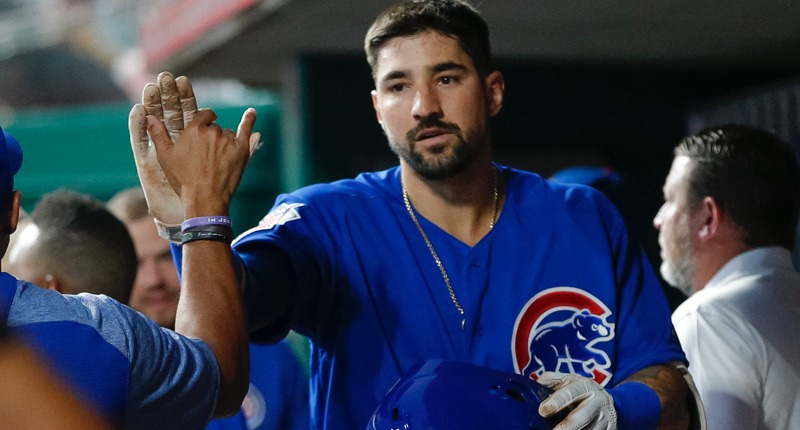 Yesterday, still-quite-new, but extremely-very-popular, Cub Nick Castellanos somehow made even more Cubs fans by not only homering in the game last night, but also by dropping some serious humanity in an event before the game. The 27-year-old outfielder got emotional when talking about his relationship with baseball, his new manager, his new team, and his life.

Here are the comments from Joe Maddon on 670 The Score, which preceded Castellanos’ appreciative and emotional reaction:

“A couple of games ago we had that bad game in Philadelphia and I took everybody out but him,” Maddon told Laurence Holmes. “So he came standing next to me before his next at-bat and I said ‘How ya doing man?’ He said, ‘Listen, I’m fine, I want to play all nine innings here because by getting one more hit, I get one more hit closer to 3,000, and he doesn’t just say that. This kid really believes this stuff. Before every game he looks at me in the eyeballs, we do the fist bump and he says ‘Happy Opening Day!’ He treats every day like it’s Opening Day. What a wonderful way to go through your Major League Baseball life, because that’s what happens sometimes, you forget what it’s like when you show up for the very first day, what that feels like and if there’s a way you can even trick yourself to re-capturing those moments, do it.”

Castellanos explained that perspective a bit more, getting philosophical in the process.

“Why is today not Opening Day? Prove to me that it’s not,” Castellanos asked and thoughtfully prodded reporters, per Cubs.com.

And when the team’s current record was cited, Castellanos was ready.

“Well, that’s only if you believe your record,” Castellanos said. “It’s kind of a mentality like, if what has happened is a memory and what’s going to happen is a thought, you’re taking yourself out of right now. So, in that case, every day is Opening Day.”

In that school of thinking, this moment is the only moment. The past is gone and the future isn’t a thing, so the only moment – the only day – is this one. Every day is Opening Day.

I dig it for personal reasons, but I also reckon it works well for some baseball players to have that mentality.

So far so good for Castellanos with the Cubs, in any case. He is currently the best hitter in Cubs history (technically!):

The full Score interview with Castellanos is right here, by the way: