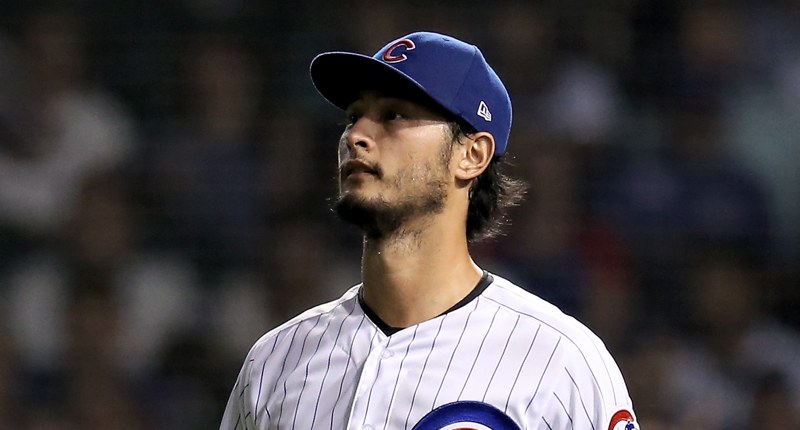 On the results side of things, Yu Darvish’s outing last night was his worst in a good long while, having allowed 7 ER in just 5.1 innings pitched.

That’s … crazy. Think about what he was doing last year and at the start of this year. And how he’s the singular record holder for a streak of striking out a ton of guys while simultaneously not walking any of them.

The homers, though. After the four dingers last night, Darvish’s HR/9 is up to an ugly 1.87, which, even in this era, is good for the fourth highest rate in all of baseball.

Do we make anything of it? Couldn’t say for sure just yet. It did seem like the Giants were kinda selling out on breaking pitches with two strikes – maybe the thinking was (1) Darvish goes offspeed in a lot of two-strike counts, and (2) I might strike out anyway, so I may as well just sit back and let it rip. It worked for the Giants and it may be something that has worked against Darvish even during this successful run.

Worth noting that, despite all the Ks and the lack of walks, Darvish was getting hit really hard by the Giants last night. The stuff is great and the command is mostly good. What I wonder? Maybe the Giants had some sequencing things figured out very well and a good game plan. pic.twitter.com/sziOcoFNHQ

Also, roll your eyes on over to the pitch velocity column: pretty clear the game plan for the Cubs was to go heavy on offspeed (Darvish threw just 19 four-seamers), but the Giants game planned to go heavy on sitting back and ripping offspeed when it was hittable. I’m thinking the Giants deserve some credit. (I know folks will wonder about tipping pitches, since it has been a Darvish issue in the past, but I don’t yet have any sense of that being an issue again. I guess it is potentially on the radar.)

That said, as Darvish himself pointed out last night, it’s not like he hasn’t *usually* had a lot of success with two-strike offspeed stuff:

The takeaway? Eh, maybe a little bit of good game-planning and execution by the Giants, and then also perhaps a need for Darvish and the pitching crew to think about his sequencing a little bit. You just don’t want to create a situation where opposing hitters have an opportunity to cheat in the very moments they’re supposed to be most vulnerable.

We’ll see if there is some tweaking going forward, or if the Cubs and Darvish think this was just a little flukey. The stuff and the command are obviously extremely on point right now, and that’s the biggest hurdle.