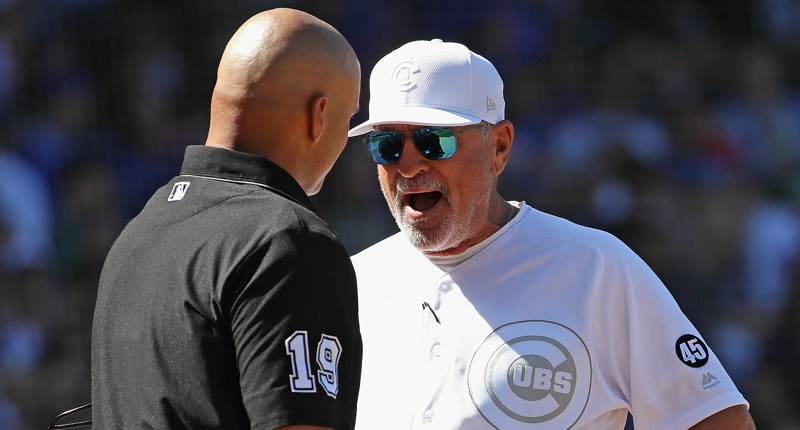 Pinch-hitter Ian Happ worked a great eight-pitch at bat with the bases loaded and two outs in the bottom of the fourth inning, back when yesterday’s game was very much in the balance. He took ball four, well outside the zone, but it was instead called a strike. Thus, strikeout, inning over, four-run deficit, instead of what it SHOULD have been, which was bases loaded, two outs for the top of the order, and a three-run deficit.

He let the ump know what was up, and immediately got the boot:

Ian Happ was ejected from today's game for arguing this strike 3 call.

Feel free to sound off with your thoughts ⬇️ pic.twitter.com/gPkCXAUkJM

Nice quick trigger there, too, from the guy who can’t be bothered to call an accurate strike zone. Joe Maddon called it the turning point in the game, frustrated that Happ did his job and things turned out the way they did.

Happ’s thoughts are spot freaking on:

Happ, on bases-loaded called strikeout on outside pitch in fourth: "It's really unfortunate that you have that type of at-bat, eight pitches, make a bunch of good decisions and, not only are you not rewarded for it, you're hurt, you're punished."

Ian Happ said home plate umpire Vic Carapazza "guaranteed" him on the field that 3-2 pitch in the 4th inning was a strike.

Oh, you “guarantee” it was a strike, eh? I’m sure Ian can expect to hear from you: 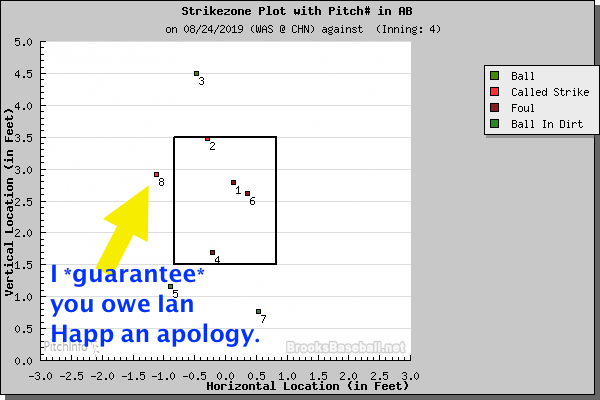 I guarantee an electronic zone wouldn’t have messed up that call, sir.

Interesting to hear the Nationals’ broadcast crew perspective on the strike zone yesterday:

"You get a guy thrown out of the game, you start getting all the calls on the other side. Vic Carapazza is not happy with the Cubs today and they're not getting any calls." – #Nationals broadcast

In other words, yeah, we see that you’re getting screwed on the zone, but maybe you deserve it for some reason because you offended the delicate sensibilities of the big baby behind the catcher?

Anyway. Whatever all of this would have meant for the ultimate score in the game – Cubs may well have lost anyway – my broader point remains, as it has now for several months: it’s time for some kind of electronic review (at a minimum) of balls and strikes. The league wants it. Some kind of replay system for a few challenges per game IS appropriate and technologically feasible at this point.

And Happ could have immediately taken Carapazza’s “guarantee” and stuck it up his back pocket.