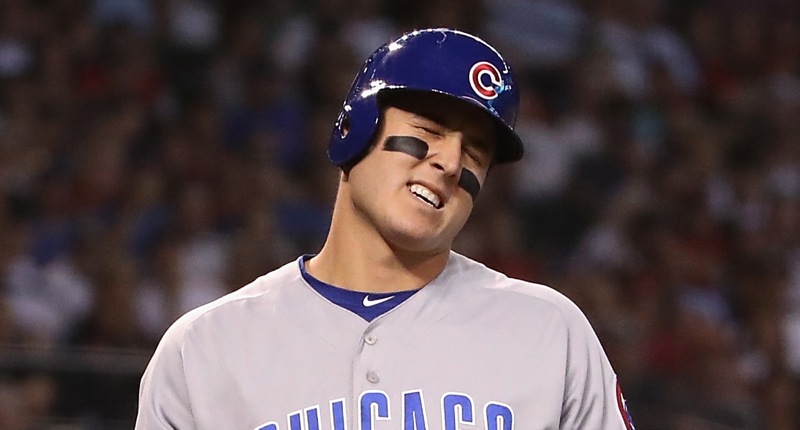 Yikes. Not having Anthony Rizzo for a game and a half this weekend against the Nationals was bad enough, but if he’s still out after an off-day yesterday, that’s not a great sign for his tight back.

Anthony Rizzo just told us on @ESPN1000 he does not expect to play tonight against the NY Mets. "As of now I don't expect to play but I am going to get to the park and we are going to treat it and see if I can feel even better. It has loosened up a lot since Saturday."

“As of now I’m a no go tonight” RT @ESPNChiCubs: Rizzo says he’s still a little ‘restricted’ re his back. Says it came out of nowhere. He’s on ESPN 1000 now!

Of course it’s possible that his back loosens up by tonight and he feels good to go, but even if that happens, it seems much more likely that he’d be available off of the bench, rather than starting at first base. That sucks big-time, because Mets starter Marcus Stroman has been nails against righties this year (.212/.275/.304), but has been very susceptible against lefties (.300/.349/.445). You’d like to have your best lefty weapon in there, especially with the offense scuffling.

More broadly speaking, the goal of course should be to make sure Rizzo is 100% for as many games as possible down the stretch. But the Cubs are already now 3.0 games behind the Cardinals, and September is just around the corner. Moreover, these Mets are chasing the Cubs in the Wild Card race.

I guess I’m hoping some magic happens for his back between now and tonight, but now I’m expecting him to be out. If he has to miss more than today, the Cubs may consider an Injured List move, because they could backdate it a couple days anyway.