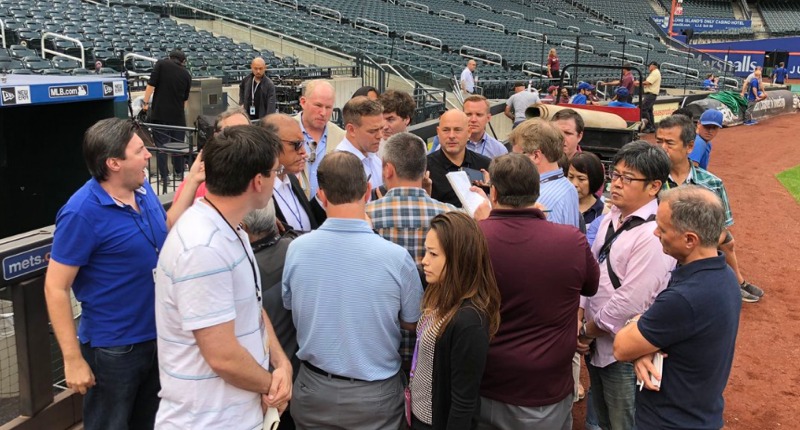 Theo Epstein hosted a little media scrum on CitiField not long ago, and it looked a little something like this:

Among several topics addressed, Epstein mentioned that Ben Zobrist has been facing live pitching while at home in Nashville, Tennessee and is in good shape as he prepares to return to Chicago.

And to that end, there are apparently no more minor league games scheduled for Zobrist, who’s on track to return on September 1st. Blink and you might’ve missed it, but Zobrist appeared in 12 Minor League games overall during his rehab assignment (three in A-Ball, three in High-A, one in Double-A, and five in Triple-A) slashing .189/.333/.405 with matching 17.8% walk and strikeout rates.

You can see comments about Zobrist from the media here, here, and here.

Moving onto another missing Cub, Willson Contreras, drives more good news. According to Epstein, Contreras is catching Jon Lester’s bullpen session today. Here’s a look at him heading out with his gear.

Obviously, given the location of his injury (hamstring) practicing any catching (i.e. squatting for a long period of time) duties is an extremely good sign. There aren’t any rehab games scheduled yet, but we could learn more about that soon.

It sure helps when the I-Cubs have a few extra games, eh?

And finally, while Anthony Rizzo is not in the lineup again tonight, the Cubs may not have to be without him for too long. In fact, Epstein implied that he’ll likely sit out again tomorrow, but could return as soon as Thursday against the Mets.

But while I’m of course very happy to hear that, things could get tricky quickly. Rizzo’s last game was on the 24th, but you can only back-date an IL stint 3 days. So if we were to reach Thursday, the 29th, and he wasn’t yet placed on the IL, the Cubs could back date it only to the 26th. And if he does go on the IL at that point, there’s a chance that he could feel up to playing before his stint is over, which could cause him to miss more games that would’ve otherwise been necessary by IL-ing him today. I don’t have a strong opinion on this, though, because (1) I don’t have NEARLY enough information to make any sort of suggestion and (2) even if I did and could understand it, these things aren’t exact sciences.

The Cubs haven’t been great managers of the IL in the past, but my experience with Rizzo’s back tells me he should be back before an IL stint becomes absolutely necessary. And, hey, it sure would be nice to have him on the field when the Brewers come to town this weekend.