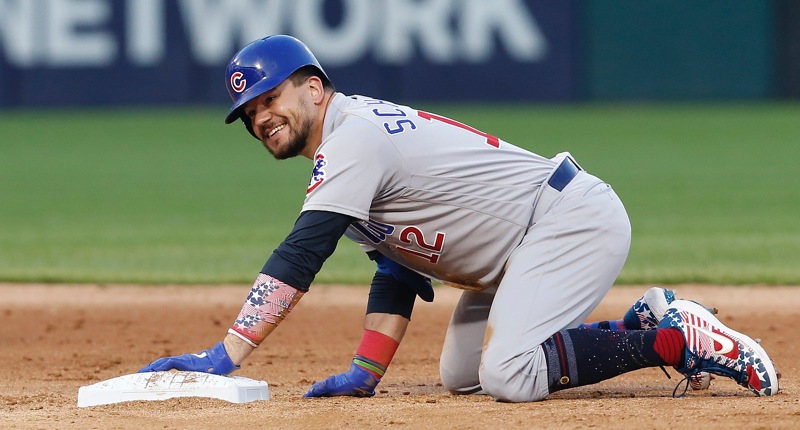 The Psych majors will call me crazy, but here it goes anyway: Kyle Schwarber is on the verge of a massive breakout.

Very exciting, I know. But before we dive directly into the hope pool, let’s consider what’s been preventing him from turning into the type of elite hitter he was always supposed to be. On a narrative level, Schwarber was rushed up to the Majors for a playoff run in 2015 (he came up more quickly than any other top Cubs prospect, including Kris Bryant) and then also suffered a massive knee injury in 2016 that ate up an entire season.

Those two factors alone are both unique and essential to his story, but you know about both by now. And as unfair as it may be given those factors, Schwarber has still had his fair share of faults that need to be addressed. For example …

But things have been fundamentally better across the board (1) this season and (2) especially lately, which is leading to better production overall and even more optimism going forward.

As you can see, in 2017, Schwarber was striking out 47% more than the league average hitter. In 2018, 27% more. And this season, just 16% more overall. That’s a huge improvement in his biggest area of weakness – something that’s all the easier to see visually: 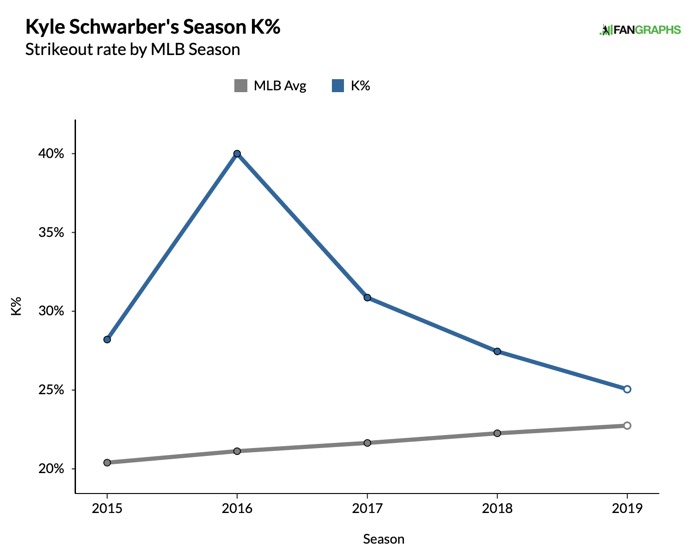 Encouraging enough, but it gets even moreso when you break down this season further.

Schwarber actually has the worst BABIP of his career this season (.236), but that’s despite the fact that many of the underlying signals would suggest otherwise. For example, Schwarber’s 2019 line drive rate is slightly better than his career, as is his hard-hit rate. So right there, alone, you might expect it to be – at worst – about as bad as it’s ever been, when in reality it’s somehow slid down further.

But the interplay with his pull rate is what really baffles me.

Schwarber routinely faces one of the most extreme shifts in baseball, and rightfully so. He’s constantly hitting would-be line-drive singles into shallow right field, where they’re gobbled up by an overly shifted infielder. And without enough speed to beat many of those plays out, he’s thrown out at first … a lot. But look at how significantly his pull rate has changed this season: 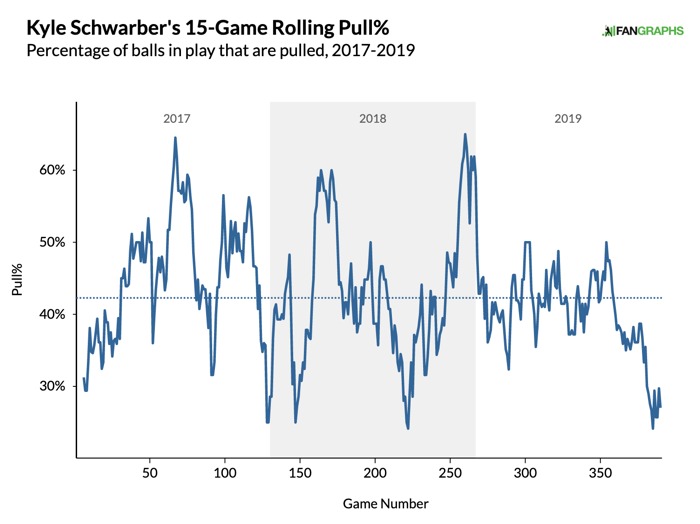 In 2019, Schwarber is not only experiencing the lowest-lows in terms of pull rate, he also hasn’t had any spikes nearly as high as he has in the past.

This season, Schwarber is pulling the ball 3% less often than the league-average hitter. And since the All-Star break, it’s been 15% less.

Obviously, pulling the ball isn’t fundamentally bad – in fact, for some guys, it’s the only way to generate power – but for a big bat like Schwarber, it isn’t as necessary, especially not at the expense of his BABIP and batting average.

But here’s the thing: this dramatic drop in pull rate can help ramp his BABIP back up in two ways: (1) in the short term: more balls in play to the opposite field and up the middle should turn into more hits and (2) in the long-term: defenses will have to play him more traditionally (less of a shift), which could help when he does back-slide from time to time.

Before this season, as we stated above, Schwarber had one of the single lowest contact rates in all of MLB. And when you’re already struggling to turn the balls you do make contact with into hits, less contact doesn’t help. But here in 2019, Kyle Schwarber’s contact rate is up to 75.1%. 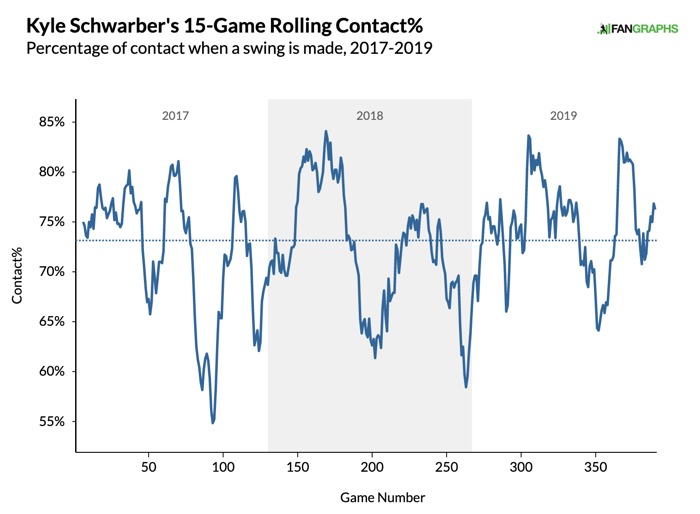 That, alone, is impressive, but it gets even better since the All-Star break: 78.1%. Again, what’s nice about making more contact is that, in general, that should lead to a few more hits (and a few less strikeouts) independent of BABIP, because there’s more balls in play to begin with.

So where does all of this lead us?

Well, to recap, Kyle Schwarber has improved this season on each of his three biggest weaknesses, and especially so lately. For the season as a whole, the production hasn’t quite met the underlying numbers just yet (103 wRC+), but things are inching closer since the All-Star break (119 wRC+).

And while experience has taught us not to simply call Schwarber “unlucky,” the data is changing on that front, too. Because at the very time he’s done a lot to address the very reasons he’s been “unlucky,” he’s gotten even unluckier (.167 BABIP since the ASB) … while also producing more than usual (119 wRC+). Think about that.

Ultimately, based on the data we see here, I’d guess we’re at the beginning of a huge offensive step forward for Kyle Schwarber. Hopefully it comes before this season is up.