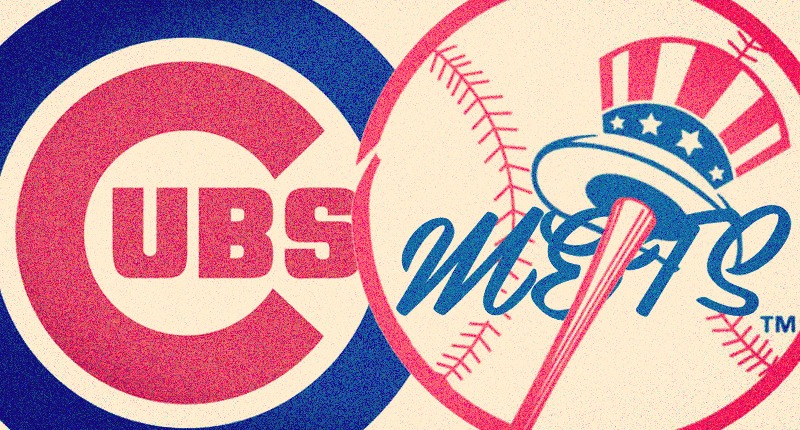 I’ve already made the joke with the image of this post before, but I just still find it funny. I mean, just imagine if White Sox fans were forced to look at their favorite team’s logo in the style of the Cubs art. They’d freakin’ hate that. And apparently, that’s where the Cubs have brought me: HATE.

And now for the actual information: The Cubs are hitting the road for a quick three-game set in New York, before coming right back to Wrigley Field for three games against the Brewers. That puts them in a tough spot. No one likes to be swept before heading out on the road to face three extremely tough pitchers, before coming home to face one of your biggest competitors.

That’s just a lot of bad all at one time. If they manage to keep their heads above water until the off-day next Wednesday (which, incidentally, precedes a four-game road series against the Brewers … sigh), I’ll be impressed. This is gut-check time. The entire season can be defined over these next 1.5 weeks, particularly with the Cubs already down 3.0 games to the Cardinals.

The New York Mets (67-63) are 6-4 in their last ten, but also just lost three straight at home. They’re only 2.0 games behind the Cubs in the Wild Card race, but that’s good for 11.5 games out of first in their division. The Cubs are lucky. They’re not much better than the Mets, but still have a chance to take their division.

Cubs Pitcher: Jon Lester needs a big bounce-back start in the biggest way possible. He’s had far too many blowups here in the second half of the season, including his last outing against the Nationals (6 ER in 4.1 IP), and the Cubs will need him to be good if they hope to reach October at all – let alone go deep into the postseason.

Cubs Player: Javy Baez has seen his season-long slash line drift down to just .281/.313/.530 (112 wRC+). Obviously, for a player with his skillset on defense and around the bases, that’s still very good, but it’s a far cry from 2018. Like Lester, Javy Baez needs to get hot, like right now, if the Cubs are gonna be the best version of themselves.

Mets Pitcher: Marcus Stroman will face the Cubs tonight in his fifth start as a member of the Mets. He hasn’t been particularly effective through his first four outings (10 ER in 19.2 IP) and has walked plenty of batters along the way, so hopefully the Cubs can get to him early and hold on, because this is a tough week of pitching matchups for Chicago.

Mets Player: Peter Alonso is scorching hot in the month of August, with a .302/.388/.616 (156 wRC+) since the beginning of the month. Cubs pitchers would be wise to stay clear of him when possible.